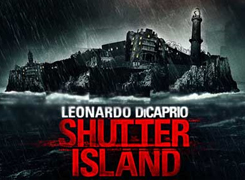 Director: Martin Scorsese
Starring: Leonardo DiCaprio, Mark Ruffalo, Ben Kingsley
Rating: 15A
Martin Scorsese’s latest sees him once again reunited with Leonardo DiCaprio for the mystery-thriller Shutter Island. Based on the 2003 novel of the same name by Dennis Lehane, the film deals with the arrival of U.S. Marshal Ted Daniels to Shutter Island, where he and his partner are tasked with solving the disappearance of a patient from Ashecliff Hospital for the criminally insane.

Right from the get go Scorsese establishes an unsettling tone which really works to the films credit. He wants his audience to be filled with a sense of uncertainty and intrigue about this eerie place. The wards of Ashecliff are suitably grim but nonetheless pleasing to look at in the context of the film.  An ominous musical score looms over the opening scenes and continues to evolve with each disturbing revelation throughout Daniels’ investigation.

Leonardo DiCaprio may have once been seen as nothing more than a heartthrob, but he has really come into his own in his most recent films. Like The Departed, DiCaprio once again proves here that he has the talent to back up his image. Daniels is a seemingly confident character, and his grim search of the haunting island is made very believable by the capable DiCaprio. He’s supported by veteran Ben Kingsley who has an understandably creepy air about him as the head psychiatrist Dr. John Cawley. Also notable is the diverse cast of patients, who really make the film their own with some genuinely memorable interrogations.

The main problem I found with the film was its length. I’m not one to complain about a long movie normally, but Shutter Island really seemed to drag in its last forty minutes. Exposition which could have been cut to ten minutes, is inexplicably stretched out over a few scenes and I found this to detract from the overall experience.

Nevertheless Shutter Island is an intriguing mystery that’s guaranteed to keep you guessing. It’s just a shame that things couldn’t have been wrapped up quicker than they were. In that case, it would have been a classic.