The sudden, untimely death of Micheál Hughes has shocked the community of Claregalway.  Micheál had gone to South Africa for a much needed break from business. However, whilst there, he fell ill and underwent major bypass surgery which unfortunately, was not successful.

Paying tribute at his funeral mass, which was attended by hundreds of  mourners, Fr. Noel Mullin described Micheál Hughes as a great family man, a pioneer, motivator, catalyst, dynamo, and also a great achiever. 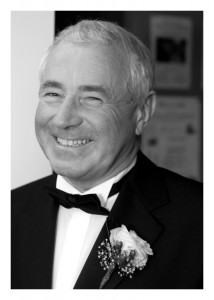 In 1962  Micheál took over the shop and post office from his grandmother and sister Maura. This is where his success as a businessman began.

In the early sixties he bought a digger and other machinery which were put to use all over the West of Ireland on drainage and other schemes and involved with him were his life long friends Manzie Hanley and Paddy Joe Hughes.

He set up Claregalway Development Company which built the Lakeview Housing Estate beside the Church with its own water and sewerage scheme as part of it. Helped by his uncle James, he built a piggery to hold upwards of 400 pigs, said at the time to be the first such enterprise of its size in the West of Ireland.

In the late 1960’s Micheál survived an horrific head on crash with a delivery van resulting in a ruptured liver and was given little or no chance of surviving, but against all the odds he did survive and went on to make a full recovery and to live another 40 years with no major adverse side effects from the accident.

When much of Ireland had only single channel T.V. reception from R.T.E.  Micheál and a few others including Joe O’Neill, Paddy Greaney and  Jimmy Duggan set up the T.V. Deflector System which, for the first time, gave the people of Claregalway and surrounding areas access to BBC, ITV, Channel 4 and so on. Micheál was always ahead of his time, always thinking of the next challenge.

He set up an I.T. company Merit Solutions in 1992, which pioneered electronic scanning at the supermarket check-outs and led to further developments such as on-line shopping and so on.

He was a man of great foresight and vision. When he saw opportunities he grasped them, a man not afraid to take risks. He faced obstacles and difficulties also.

Described as the business face of Claregalway, he was a formidable driving force. Micheál did not often appear in the public eye. He became more a ‘behind-the-scenes’ man but nonetheless, a dynamic driving force for improvement, change, for the betterment of the community in general.

It is incredible to think how much he achieved in a few short years, with his vision he transformed a small rural grocery and hardware shop-come-post office into the magnificent shopping centre that it is today with a plethora of ancillary business outlets as part of that complex.

Claregalway has undergone total transformation over the last 12 years. Then there were only three small shops, two pubs and petrol pumps.  There was no chemist, no barber shops, no dry cleaners, no hair salons, no hotels, no bookmaker, no florist, no solicitor.  With his foresight, Micheál Hughes took note of the shortcomings in Claregalway and took the first steps to set about rectifying them.

Micheál has left an incredible legacy of achievements and his impact has been enormous. The birth of his first grandchild James was a big moment for Micheál – he idolised him.

Micheál’s daughter, Mary, gave a heart rendering tribute to her wonderful, generous, warm-hearted Dad which moved the congregation to tears.  Everything she said was just as he was – The man that did it his way.