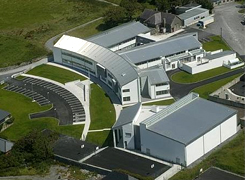 In an unprecedented development for Calasanctius College Oranmore, ten local families have appealed the school’s decision to refuse their child a school place.
Today seven families will have their case heard by an Appeals board set up by the Dept of Ed and Sc. under Section 29 of the Education Act. A further three families’ appeals will be heard in early March. More may follow. Twenty three (23) children in category one (ie. the most deserving category based on school policy) all from local families living in Oranmore, Clarinbridge and Carnmore have been refused places for Sept 2010.

This is only the tip of the iceberg – an overall total of 133 children who applied for a school place this year cannot gain entry. Further, some families applying for a space for 2011 have been informed that the school is over-subscribed. There is no space. Unfortunately, the signs are not good either from a Dept of Ed point of view.

In a most worrying finding when I had a motion to the Minister for Ed. heard last Wed. about the lack of adequate space in Calasanctius College, I was informed that their application was not a pressing priority. The current band rating assigned to Calasanctius is 2.5 whereas it would need to be in Band 1 to be top priority for the Dept.

I have brought this to the attention of the Acting Principal and the Board at Calasanctius. They have assured me that it is their intention to present a strong and convincing case to have the band rating changed when they meet with Dept of Ed. officials next Monday Feb 22nd.

I asked that the Minister and his Dept sanction extra space to increase Calasanctius to an 800 pupil school. In the short-term I have asked for the approval of temporary space on the proviso that it would be made permanent space within two years. Notably, this request is consistent with the Depts own report on school accommodation (2007) which has not been acted on.

I am determined that all local children from Category 1 feeder schools will be accommodated in their local second-level school. They have an educational right to a school place, said Senator Fidelma Healy Eames.