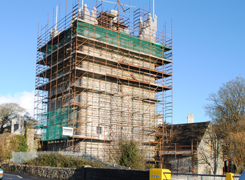 By Declan Tierney
The continued renovations of Claregalway Castle can proceed as planned as the go ahead has been given to retain a number of alterations carried out and embark on additional works.
This is despite opposition by the Department of the Environment who took the case to An Bord Pleanala and took issue with a roof opening which is used to let in light.

The structure, known as a fumeral, caused some consternation within the Department as they said that it was over large and there was no historical or architectural precedent for its design.

However, An Bord Pleanala ruled that the extensive programme of restoration works leading to the reuse of Claregalway Castle would not seriously injure amenities of the area or property in the vicinity.

The Board said that the scale of the fumeral – once used to allow fumes to escape from fires in the castle – had been reduced significantly and its visual impact had improved.

They said that the completion of the fumeral in accordance with the revised proposals would be functionally and aesthetically compatible with the character of the castle and would not undermine its integrity as a protected structure and recorded monument.

Claregalway Castle is a late 15th century tower house which occupies a prominent feature on the surrounding landscape.

Prior to the castle’s restoration the roof, battlements and internal floors were missing. The restoration project is nearing completion and most of the internal works are complete, the slated roof is in place and the battlements and chimney stacks have been reconstructed.

The main area of concern relates to the erection of a fumeral structure at roof level which did not form part of the original planning permission but was included when the roof was being re-constructed. Planning permission was refused for the retention of the fumeral for reasons related to its adverse visual and historical impact on the designated status of the castle.

Fumerals are medieval chimneys though which smoke from centrally located fireplaces escape from top floor rooms through a series of timber louvres in the elevations.

There are no surviving examples of either roofs or fumerals in late 15th century Irish tower houses although some have been reconstructed in Drimnagh and Bunratty Castles and some original roofs and fumerals exist in late medieval Scottish and European tower houses.

The Department of the Environment felt that the provision of a modified fumeral set an undesirable precedent for other tower house restorations.