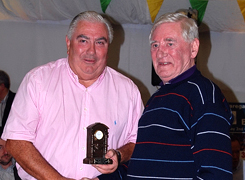 Patsy O’Hagan, a man of many talents, sadly passed away early on Sunday morning, March 21st last, leaving behind a record of a lifetime of immense achievements both on and off the football pitch. His death removes from the GAA community one of the most respected and influential figures in football performance and influence. Although his loss is deeply felt by friends on a country wide basis, it will be most keenly felt in the Claregalway community that he served so well and in his native County Down where he was an immensely talented footballer during his county’s golden era of the early 1960s.

The 1960 Down team were the first team from Northern Ireland to bring the Sam Maguire Cup across the Border. Patsy began his career as a stalwart for Co.Down winning two All-Ireland medals at full forward against Kerry in 1960 and at wing back when Down defeated Offaly in 1961. He also won three National Football League medals, five Railway Cups and seven Ulster Championships, leading his team out as Captain in 1966. He was a selector for the Down team which won the 1968 All-Ireland title.

His football legacy in Claregalway is reflected directly in the Club’s evolution and progress. He and his close friend Gerry Hestor R.I.P. were among the founder members of Claregalway GAA Club and leading instigators in the organisation and promotion of football developments in the parish.  Patsy’s reputation with Down and his leadership gave a great lift to the Club in its formative years. He organised the Parish Leagues as a platform for the recruitment of young footballers in numbers and for their enjoyment.

As in the case of most new clubs, a football pitch and a settled home for the Club were required. It wasn’t long until Patsy pushed for the acquisition of land as a priority on the Club’s agenda and the focus was centred on the development of playing facilities. Eventually, in the late 1970s a new dawn for sports in Claregalway, and for football in particular, opened up with the purchase of 7½ acres of land in Lakeview from Martin Boyle of Cregboy. Patsy was subsequently appointed a Trustee of the Club.

Patsy O’Hagan was Chairman of the Organising committee that mounted an energetic community-wide fundraising campaign to finance the development of the new playing fields. At the same time the Club set about providing facilities for indoor sports. Continued fundraising together with a government grant enabled the Club to build what is now known as the Leisure Centre. In practice, it is a Sports Hall housing a variety of activities, e.g. basketball, badminton, indoor football and cricket. It was opened in May 1981. It was the first time that the Claregalway community had access to purpose built facilities for sport and recreation. Later, the hall was extended to serve the community at many levels including concerts, drama and feiseanna.

There is further information that people may not know about Patsy O’Hagan. He was the first player to score a hat-trick on the hallowed turf in Wembley Stadium when Down played Galway in the 1959 Grounds Tournament Final. In that game he was being marked by Jack Mahon and scored three goals for Down. He was also on the first Irish side which took on Australia at International Rules in 1967.

His grandson Danny Cummins is a member of the Co Galway Senior Football panel.

Patsy is pre-deceased by his wife Kay and is survived by his sons Brendan, Michael, PJ and John, and daughters Dympna and Mairead.

Reposing at Claregalway Mortuary Chapel today (Tuesday) from 5pm to 8pm followed by Removal to the adjacent Church of the Assumption and St James. Funeral after 12 noon Mass (Wednesday) to Claregalway Cemetery. Family flowers only. House private.

May his gentle soul rest in peace