Galway’s Tiny Dancer Lily-Mae Morrison was presented with a cheque for €95,000 at a special fundraising night held in Monroe’s Live, Dominick Street on Friday night. 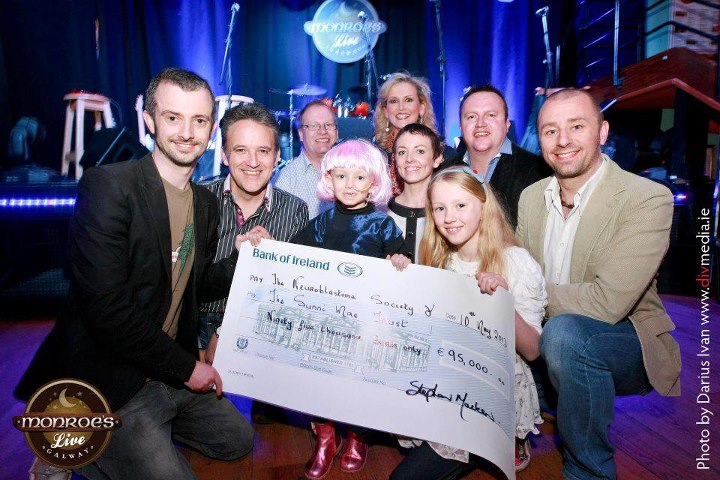 The cheque, the proceeds of the charity single Tiny Dancer, will be divided between the Sunni Mae Trust and the Neuroblastoma Society, and was presented in person to Lily-Mae and Stephen Smith of the Neuroblastoma charity.

Lily-Mae has just returned from London, where she has undergone groundbreaking treatment to combat the rare form of cancer.

The Tiny Dancer single, a cover of the 1971 Elton John hit, brought together a “who’s who” of Irish music and featured Declan O’Rourke, Mary Black, Paddy Casey and Mundy among others.

While it just missed out on the coveted Christmas Number One slot, it was the highest selling single in Irish chart history to reach number two at Christmas and received an endorsement from Elton John himself.

Producer Stephen Macken, who conceived and co-ordinated the charity single, said Friday’s event at Monroe’s Live was the culmination of a year’s work.

“We’ve raised money way beyond my expectations. I really only thought we’d break even and the benefit would be publicity, but €95,000 for Lily-Mae and for other children with neuroblastoma—I really couldn’t be happier.” he said.

Lily-Mae’s mother Judith Sibley, said she was delighted with the support they have received from the public.

“When Stephen first had the idea of Tiny Dancer we never thought we’d raise anything like this amount of money, so to raise €95,000 is just utterly incredible. We’re so delighted.”

Galway and Irish musical talent turned out in force to show their support for Lily-Mae on Friday night, with The Voice of Ireland star John Gaughan among the highlights of a hugely entertaining evening.

Monroe’s Live owner Gary Monroe, who donated the venue and entertainment free of charge to the Sunni Mae Trust, said he hoped to continue to provide encouragement and support to the trust.

“It was our privilege to support such an inspirational little girl, and a charity that has touched all our hears in Galway and beyond.  We would like to thank the artists who performed on the night, and all who came to show their support,” he said.