In 1975, the Library Group began to incorporate government heads, who met annually to discuss economic issues.  The Library Group evolved into the G6, named after the number of government heads attending its meetings.  The addition of Canada to the group in 1976 brought about the group’s renaming as the G7.  In 1998, Russia joined the assembly, resulting in its present name – the G8

The G8 is an assembly of world leaders who meet annually to discuss global issues.  It works throughout the year to tackle important issues such as the economy and climate change.  The G8 discusses and creates global policies.  However, adherence to these policies is not obligatory and other countries can decide whether or not to obey. 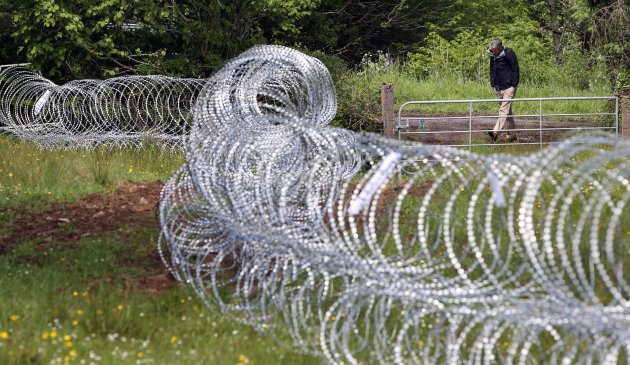 Barbed wire around the area of Lough Erne

As G8 president, it is at the discretion of the British government to choose the venue and this year it settled on Lough Erne. The location, a golf resort, is a few miles outside Enniskillen. In recent years more remote locations have been chosen in order to try and deter protesters from descending on a venue.

A metal barrier is being erected that will stretch for miles around the resort in attempt keep protesters out and the government here has just passed a law that will allow it to shut down the mobile phone networks if there are fears of a terrorist attack.

There will be additional police numbers and there is close coordination between the PSNI and gardaí with the summit just 11 miles from the Republic’s border.