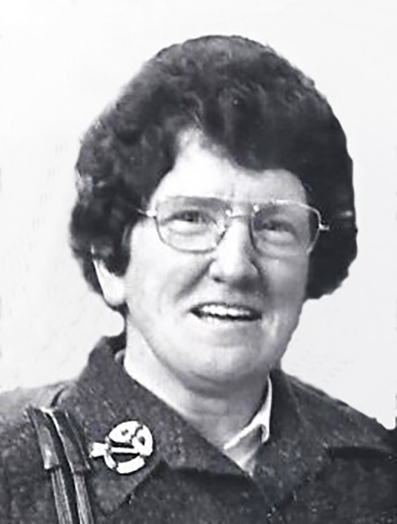 Reposing at Sioraíocht in the grounds of the Church of the Assumption and St James, Claregalway on this Tuesday evening from 5pm with removal at 7pm to adjoining church. Funeral Mass on Wednesday at 11am, with Burial in Cregg Cemetery.

Family flowers only. Donations if desired to Carer’s Association.

Update 10th of August 2013: There were many memories recalled as the news spread of the passing of Maudie Moran of Peake last week. Maudie’s death came just two weeks after the death of her sister Nellie Prendergast of Liscaninane. Formerly Maudie Keaney of Waterdale, Maudie was a much loved active community person.

The highlight of Maudie Moran’s career was undoubtedly being named as Mayor of Claregalway. That title came about when Claregalway Football Club bought the field from Martin O’Boyle and they went on to develop the pitch and later a community centre. The community set about building a facility that would cater for all ages and all sports and although they received substantial funding that covered two thirds of the initial cost there was still a lot of fundraising to be gathered. Among the fundraising ideas that came on board was to elect a Mayor of Claregalway. Among those who went for the position of Mayor where the person who collected the most money would be crowned Mayor of Claregalway was Maudie Moran of Peake.

Maudie had the backing of several organisations and was deeply involved in the ICA and in Drama. Maudie was competing against several others who were involved in the commercial sector and few gave Maudie much of a chance against the commercial world. However others grossly underrated the power of Maudie and the network of the ICA colleagues who set about the task of making Maudie the Mayor of Claregalway. Running all sorts of events that raised sometimes small money, in the end when the cash was counted Maudie Moran surprised everyone when she was named and crowned Mayor of Claregalway. Maudie was hugely popular within the Claregalway community and there were wild scenes of celebration and she was carried shoulder high by her colleagues from the Oslo Hotel to Salthill Church. Maudie was the first Mayor and represented the parish with immense pride and dignity at all events.

Maudie played a leading role in the Claregalway Festival of Drama when it commenced and is the first of the original committee to pass on. The first committee were Tom Lenihan (Festival Director), Mary Moran, Phillip Cribbin, Liz Hession, Gearóid Hartigan, Winnie Heneghan, Michael Fleming, Ann Flaherty, Tom Moran, Peter Duggan, Agnes Lenihan, Francis Moran, Michael Hession and Maudie Moran. Maudie was the complete organiser and at a time when every drama group was fed on site in Claregalway Maudie led the feeding of the multitude every evening.

When it came to carrying out any task, none was ever too big or too small for Maudie. Drama meant a lot to Maudie and she played with the old Claregalway Drama Group for many years. Indeed it was while playing with Claregalway Drama group that Maudie met her husband Micheal Moran of Lakeview and they would go on to share almost fifty years together. Always ready to entertain Maudie always pulled the house down with her version of The Cobbler. In later years Maudie worked as housekeeper for the late Fr Noel Mullin when he served as Parish Priest of Claregalway. Always ready for a bit of fun as well as serious stuff, Maudie and Fr Noel worked well together and the passing of Fr Noel brought great sadness to Maudie.

The remains of Maudie Moran were removed from Síoraíocht to the Church of the Assumption and St James, Claregalway where members of several parish organisations formed a guard of honour. After the funeral Mass celebrated by Fr Ian O’Neill burial took place in Cregg Cemetery. Maudie is survived by her husband Micheal, brother Tommy, in-laws, nieces, nephews, relatives and friends.