Up to 10,000 devotees per day are expected to flock to Galway this week for the Galway Solemn Novena, which commenced on Monday and takes place until next Tuesday 17th of February.

The 2015 Novena centres on the message of The Church on the streets—living the Gospel today.

This year marks the 30th Galway Solemn Novena, which coincides with the 50th anniversary of the opening of Galway Cathedral in 1965. 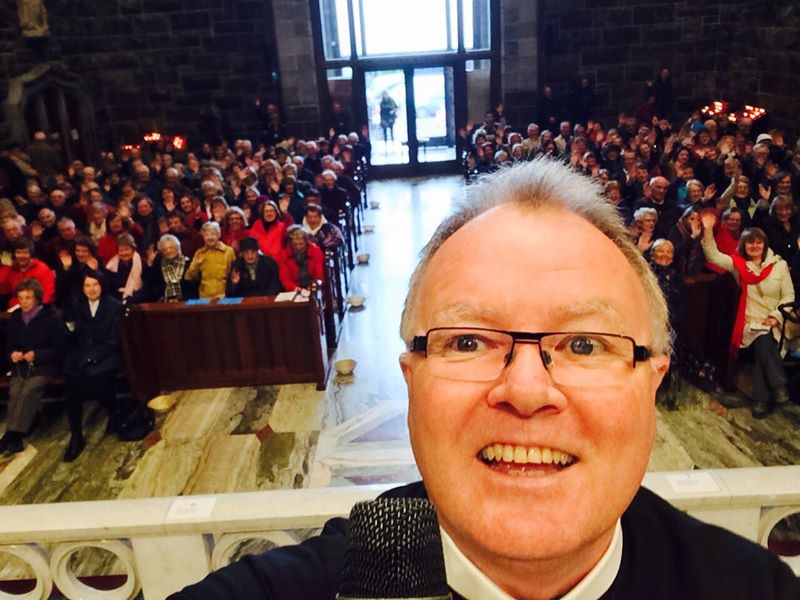 Fr Adrian snaps a selfie from the altar at Galway Cathedral during the Solemn Novena.

The Redemptorists priests, who will facilitate the Novena say the event will reflect a “time of real change for the Catholic Church”. There will be talks on Pope Francis and female speakers, which the organisers say “points to positive changes within the church”.

This year’s Novena focuses on the idea of being Crazy in Love, loosely based on the Beyoncé song, whose lyrics refer to a state of romantic obsession.

More than two centuries before Beyonce released her single, the Italian preacher St Alphonsus Liguori, founder of the Redemptorists, used the term Pazzo per amore (crazy for love) to talk about God, say the Redemptorists.

“According to St Alphonsus, God doesn’t just love humanity; God is carazy with love for humanity. God loves us so much he does wild and crazy things. No words can describe the extent to which God loves us,” they say.

“We look forward to welcoming as many people as possible to this year’s novena. This is a special year for us as we are celebrating the Cathedral’s 50th anniversary and 30 years of the Galway Novena. We have finished extensive renovations to the cathedral and it looks really beautiful,” said Fr Martin Whelan of Galway Cathedral.

This Thursday 12th of February is devoted to the Sacrament of Reconcillation (Confession). Four of the sessions that day (7.45am, 1.10pm, 7.30pm and 9pm) are services of reconciliation; there will be Mass at the remaining two, at 11am and 3.30pm with confessions before and after.

With up to 10,000 people passing through the Cathedral on a daily basis, Galway City Council has closed Gaol Road along the southern and western boundaries of the Cathedral for the duration of the Novena, to facilitate parking.

An alternative route is available along the Eastern boundary of Galway Cathedral. Local access will be maintained at all times. Advance diversion signage will be in place prior to work commencing.