On Saturday, the sun blessed us for the unveiling of the new Yeats Exhibition in Thoor Ballylee, which will now be open to the public every day over the summer. The Yeats Thoor Ballylee Society was delighted to welcome Sabina Higgins who officially opened the Exhibition and shared her perspectives on the significance of love in Yeats’s poetry. 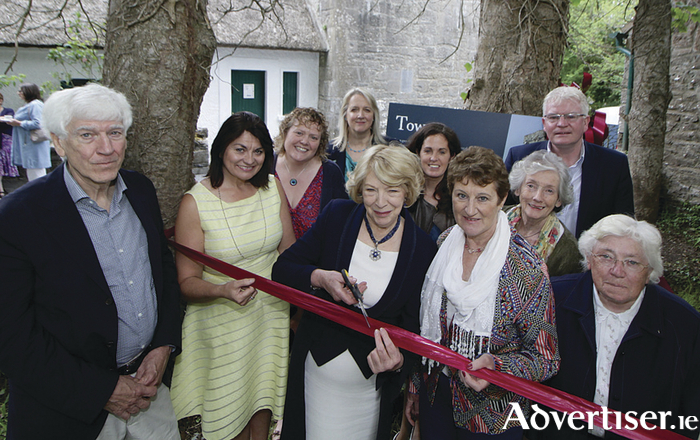 Since the tower flooded last Winter, it was unimaginable that the beauty and tranquility of this special place would be enjoyed so soon again. Fidelma Healy Eames, Chair of the Yeats Thoor Ballylee Society remarked: “today’s success is testament to the dedication of the Thoor Ballylee Society Board and the local community, their sheer resilience has meant that we can experience a bright and beautiful exhibition, four short months since the tower was submerged in water. It is remarkable and it seems to me that the tower gets better after every flood”.

Without the generosity of Yeats Scholar Joseph Hassett, the Exhibition would not have been possible. Joseph was thrilled at the event and gave a steering speech about the symbolism of the tower in so much of Yeats’s poetry. The new exhibition, curated by Dr Adrian Paterson, Lecturer in English at NUIG, explores Yeats’s relationship with the people and places that most inspired his work. It looks at the culture of the west, its crafts, stories, and songs; the central importance of the women in his life, most especially of his wife George; and his close connections with the landscapes and people of County Galway, with Coole Park and with Thoor Ballylee.

Children attending the opening were also delighted to complete the new Thoor Scavenger hunt which will be available for all families to complete over the summer. A series of cultural events will be organised over Summer 2016 to honour Yeats’s memory, his heritage and his links with the literary revival and with 1916. The Tower and Exhibition will be open to visitors throughout the summer from 10am–6pm Monday–Sunday.

Ireland’s Nobel Laureate for poetry, William Butler Yeats (1865–1939) spent his summers in Thoor Ballylee, where the landscape and spirit infused so much of his poetry. In 1928, Yeats published The Tower followed by The Winding Stair in 1933. Both collections were inspired by the life, landscape, and architecture of the place, and feature many poems set and composed at Thoor Ballylee.

In 2014, a local community group, the Yeats Thoor Ballylee Society leased Thoor Ballylee from Fáilte Ireland to develop it into a cultural centre. It was re-opened on June 13th 2015 in time for the Yeats 150th Anniversary. The Society is undertaking a national and international fundraising effort to support the ambitious project.