The unexpected and untimely passing of Pat Heneghan recently sent shock waves through the hinterland of Lackagh, Claregalway and his native Glenamaddy.

Pat came to live in Knockdoe where he set up home with his wife Tricia when he was stationed as a valued member of An Garda Siochana at Loughgeorge Garda Station.

Pat was very much a local policeman: he became involved in local activities and organisations in the eighties on his arrival and had his ear to the ground on everything that happened.  Along with the late Sergeant Con Gillespie they were able to sort out many problems before they ever exploded, based on local knowledge through their involvement in community.

Pat commanded tremendous respect as a Garda in the area and was of great support to many.  He went far beyond the call or duty on many occasions and his kindness was clearly demonstrated in 1996 when the home of an elderly man – the late Pat Duggan, who lived alone – was broken into.

The late Mr. Duggan used his shotgun to protect himself, and when it was taken off the elderly pensioner to undergo a forensic examination, Pat Heneghan as the local garda stayed with the man every night until the shotgun was returned to him.

Pat retired from the force in 2002 and at that stage had bought a local small farm.  Pat also got involved in a transport business, ‘To and Fro Cabs’, and together with Pete Fahy they bought a service to the area that was badly needed at the time, and proved hugely successful over the years.

Pat Heneghan was a native of Glenamaddy, and shortly after coming to Loughgeorge got involved with Claregalway GAA Club during the club’s more formative years.  His over-all contribution to the management and progress of the club in the 1980s/90s on the run up to promotion to Senior status in 2002, was characterised by his huge amount of man-hours freely given in support of the cause.  He had played with distinction for the Claregalway Juniors until his football career was cut short by injury.

However, it was his work as a secretary of the newly formed Juvenile Football Committee inaugurated within the club in 1985/86 to improve standards of football skills and team performance that Pat really excelled.  This development kick-started a new era for young footballers in Claregalway and neighbouring townlands.

As Juvenile football successes filtered up the line, the Claregalway Juniors won the 1998 County Final to qualify for the Intermediate Grade for the first time.  In the hunt for Senior status in the new millennium, Pat joined the team management as selector, headed up by PJ McGovern, and while they lost the 2000 final, they captured the 2002 title to secure promition to the senior grade.

In recognition of his service to Claregalway GAA Club, Pat was honoured with the Club’s Distinguished Persons Award in 2009.

His remains reposed at Lackagh Mortuary Chapel, followed by removal to the Church of Our Lady of Knock, Lackagh for funeral Mass; and burial took place in Glenamaddy Cemetery.

Below is a picture of Pat (left) at medal presentation in 1989 of Claregalway U-14 team winners of Galway Co Coiste Peil na nÓg ‘A’ championship by the late Joe McDonagh (then Galway GAA Central delegate) at Claregalway Leisure Centre. 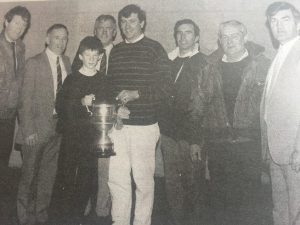 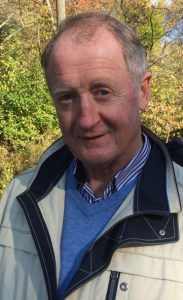