IN conjunction with the launch of their second CD, Lackagh Church Choir held two concerts in Lackagh Church last week to help raise funds for the Church repairs.  The CD title “Raise the Roof” was also the title of the two concerts that were performed to packed audiences on both nights.  The parish church was transformed into a splendid auditorium with some wonderful lighting effects to add to the ambience of the church.  Every week at Sunday Mass people have been in huge praise of the uplifting performances that they add to the Masses, but there was always a little bit of apprehension as to how a full concert of music and singing by the choir would go down.  However, Lackagh Church Choir is no ordinary choir as they featured a variety of music and singing styles from Michael Jackson and Liam Lawton to The Lion King and U2 as well as Broadway musicals.

Under the direction of Musical Director Martin Glavin, Lackagh Choir has already been acclaimed and to those who came to see and hear the choir for the first time they were not disappointed.

Their CD is on sale at local outlets, from Choir members or can be ordered online by emailing [email protected] 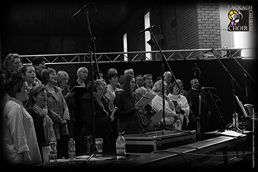