THE 2017 Galway Rose is a 23 year old nurse from Castlegar, Niamh Elwood, who works in the Acute Medical Unit at UHG and plays with Liam Mellows GAA club, saw off competition from 29 other finalists, to represent the county at this year’s Rose of Tralee Festival.

Niamh, who was sponsored by the Nox Hotel, has a keen interest in cultures, scenery and the history of different countries and has travelled extensively over the past six months.

Galway’s new Rose also plans to pursue her nursing career in order to assist the community.

The gala Galway event at the Clayton Hotel was attended by Anthony O’Gara, Managing Director of the Rose of Tralee Festival and his wife Oonagh.

Galway Roses from previous years, the 2017 Donegal and Monaghan Roses and 2016 Roses from Cork, Cavan, Luxembourg, Sligo, Tyrone and Louth were also in attendance.

And as always, the public interviews took the Roses in many different directions – taking Ollie on a journey through the stages of labour, milking a cow and making cocktails!

Galway Rose Coordinators Anne-Marie Doyle and Charlene McGough were delighted with the overall standard praising the finalists’ ‘exceptionally high calibre’ – as well as paying tribute to Ollie Turner for bringing the best out of them on the night.

Katelyn Molloy provided entertainment while the judges made their deliberations.

The proceeds of the raffle went to Galway Hospice – while the 2016 Rose of Tralee International Roses and Escorts also sold their charity single “It’s Time” with all contributions going to Crumlin Children’s Hospital. 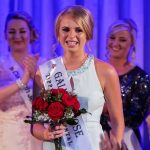