Sporting excellence and achievement are rewards from years of hard work and personal sacrifice, yet the golden moment of representing your country on the international stage, is something only a true sportsman aspires to.

When their peers are enjoying a night on the town or indulging in down time in front of the telly, the sporting elite is going that extra mile in the rain or pushing through the pain barrier with another 100 reps on the treadmill.

Years of hard work and punishing physical endurance has led one local girl to dream of achieving the holy grail of sport. 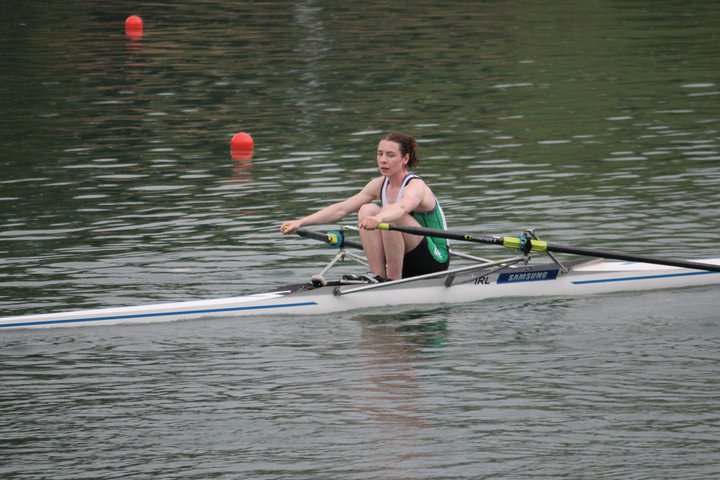 Siobhan McCrohan from Cloon, Claregalway is on track to represent her country at the Olympic Games in London in 2012.

The 24-year old rower is amassing impressive times and reaching new heights for Irish Ladies’ rowing in recent months with a top four finish at this year’s European Championships.

She and her rowing partner, UCD oarswoman Claire Lamb, raised the bar for Irish rowers in the Lightweight Women’s Double Scull at the event in Portugal, giving reasonable hope that the pair may be on course for Ireland’s first-ever appearance in Ladies’ rowing at an Olympic Games.

The event is particularly competitive as this is the only boat class available to lightweight women in the Olympics.

The young woman, who has strong Tuam connections through her grandmother Rose Corcoran of St Joseph’s Park, has her feet firmly planted on the ground and refuses to let any expectations divert her.

“London is a long, long way off and a lot will happen between now and qualifying,” she said.

“For now, I’m concentrating on my winter schedule of training and preparation for the next year’s events.”

So while  tight rein is being kept on any expectations, her dedication to her sport remains unwavering.

Training is year round, with five hours a day either on the water or in the gym, with the only barrier so far proving the weather.

“I’m out on the water every day, bar one day last year when the river was frozen,” said Siobhan.

“If I’m not in the water, I’m in the gym where we do 13 training sessions a week, from endurance to weights, water and technique.”

Such single-mindedness is no surprise to Siobhan’s mother Bridie, who has witnessed determination from her only daughter from a very early age.

“This is the way she is, she’s passionate about rowing and we’ve been supporting her every way we can,” she said.

“She’s been the very same since she was a small child.  She started ballet classes when she was five and she only gave them up the year she sat her Leaving Cert, so the dedication she’s shown to rowing has been no surprise to us.”

Her initial exposure to the sport came through her father Michael, who represented Ireland as a schoolboy and won two gold medals at the World Veteran Rowing Games in Prague in 2002.

“I was down at the water with Dad from a very early age but I only actually took up rowing when I started secondary school,” says Siobhan.

Her alma mater, Taylor’s Hill, has produced several members of her club Tribesman, where Siobhan is one of only two professional rowers.

During her time at University of Limerick, where she graduated with a degree in Aeronautical Engineering, Siobhan maintained her fitness with a regular training schedule that kept her in contention for the national titles she accrued during her student years.

The young woman is modest about her success to date, which includes several national senior championship titles as well as making top six finishes at both the World and European Championship events this year.

She maintains hard work has  a huge part to play in her overall abilities on the water.

“For some sports if you don’t have a natural talent you won’t succeed, whereas with rowing a lot of hard work can get you very far,” she said.

And while the training continues apace, the focus for the coming months reverts to maintaining competitive timings and honing her physical fitness for the next 18 months, that will hopefully culminate in that illustrious berth at the London Olympics.

“Like I said, an awful lot can happen between now and 2010 and it depends on whether or not Claire and I can build on the success we’ve had so far,” said Siobhan.

“The closest Irish oarswomen got to the Olympics was back in 2004 when they just missed out, so yes it would be wonderful to to there as the first Irish women to do so, but we can’t be distracted by such talk at this early stage.”

Whatever happens over the coming 18 months, hopes are high within the rowing fraternity that Siobhan and Claire have the potential to represent their country at the highest level. Watch this space.