When you think about it, social media—and, in particular, the accessing of it through smart phones—has been as big an influence on modern day society and culture as anything else over the past 50 years. Information, gossip, scandal, it is all now readily available at a person’s fingertips.

While the pursuit of knowledge is far from a bad thing, articles, studies and surveys published in recent times have identified some worrying trends in people’s behaviour when it comes to the time spent on social media and their smart phones.

Galway ladies football captain Edel Concannon didn’t need any of the above to awaken her senses—to realise that the time being exhausted on her smart phone was counter-productive and, indeed, anti-social.

On the evenings she was at home, she, like so many in the country, would squander away her free hours scrolling down her phone, meandering her way around the social media websites, feeding what she describes as “an addiction”. She was oblivious to everyone else in the room, including her parents.

Concannon is not alone, and a number of articles published over the past year have highlighted the correlation between social medal, and its easy access through smart phones and tablets, and mental health.

These concerns not only relate to the addictive nature of social media but also extend to the content. It often leads people to unhappily compare their lives with others—or what they think is another person’s life. What they are seeing, in effect, is just one idealised moment caught in the flash of a camera.

It’s not lost on Concannon, who along with her Galway team-mates, are giving up their smart phones for a month to raise awareness about the affects social media can have on mental health. The proceeds will go to Pieta House.

“There are times when you come off Twitter or, more so, Snapchat and I think I am actually doing nothing with my life. All these ones are going to parties or they are going out or going to concerts. Everybody is doing something. Unless you are doing something and putting it up on Snapchat, you feel like you are missing out and that you have no life. That you are doing nothing.

“Other people then get the impression because you are not uploading stuff on your Snapchat or Twitter, you haven’t much of a life. I just think people now feel they need to post up everything they are doing. To give you this impression that they have an amazing lifestyle and they are doing X, Y and Z. It isn’t a true reflection on people’s lives though.”

For Concannon’s part, she has become conscious of the increasing role social media is playing in people’s lives. At home, she found she was not communicating to the same extent as she used to with her own parents; while out recently to dinner, she observed one girl tweeting her way through her meal.

“We were looking at her and took note saying that it was desperate. To not leave her phone down while she was eating. That said, I have to say at home, in general, the conversation has deteriorated over the last few months because I have got progressively worse at just scrolling down my own phone.”

When Concannon broached the subject with her team-mates, she discovered they were having similar problems at home.

“The girls could all relate to their parents begging them to leave down the phone and talk. Still, when I suggested giving up the (smart) phones, there were a few who were a little apprehensive about it but, in general, the bulk of the players were totally behind it. Some of them thought it was a brilliant idea. So the response was amazing from them.” 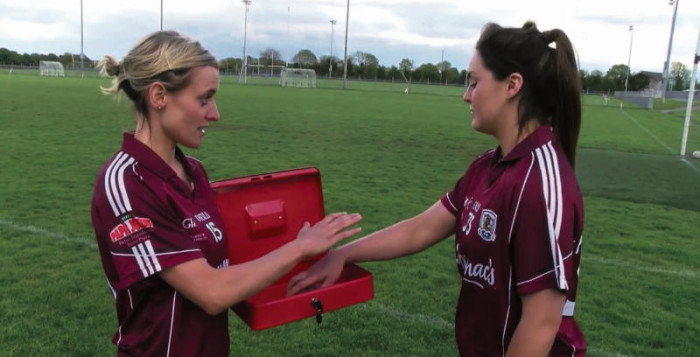 Earlier this year, former Olympic boxer Kenny Egan also spoke about the dangers of social media on mental health, underlining that it has the potential to ruin relationships and destroy the quality of human interaction.

Indeed, a study in the United States has found that 63% of Americans tap into Facebook on a daily basis with 40% of these logging on several times each day. Closer to home, a survey in the UK revealed 51% of those logging into social media acknowledged a negative impact on their mood, which included a decline in confidence due to unfair comparisons to others.

“I suppose, because we play football at such a high level, we don’t go out that much because we train on a Friday night and early on a Sunday morning,” says Concannon. “However, you really do feel like you are missing out when you are looking at people’s Snapchat stories and they are out in the pub or you can see the craic they are having at an after party.

“Snapchat gives people a platform to show off their social life. They are not all sitting down talking; they are all images of people doing shots and videos of drinking. That is totally the culture. When you are sitting at home and you know you have training in the morning and you are watching this, you do feel a bit left out or something, which is bad.”

That said, the 2004 All-Ireland senior ladies football medal winner recognises much of what can be viewed on social media does not address the deeper issues in people’s lives.

“Look, nobody wants to go onto Snapchat and see somebody crying, or onto Twitter and read somebody’s sad stories—we don’t want that—but it has just got totally out of hand with people painting a picture that life is about going out, going on holidays, going to concerts. That you always have to be doing stuff.”

As a teacher in Athlone Community College, the Tuam/Cortoon player also sees the impact smartphones and social media have on teenage students. She continues: “When you walk around the classrooms, the phones are peeking out of their pockets.

“I keep telling them—I have told them a hundred times—that it isn’t good. To leave them at home or in the locker or in the bag but they can’t. It is like another limb to them.”

She has also seen this trend in the Galway set-up, especially after high profile matches. “You would see the girls after big games and the phones are out straight away and pictures are being taken and it is up on Snapchat before you even get off the pitch with some of them.

“The (habit) might be difficult to change but I suppose there is no point going to a pioneers meeting to encourage people to give up drink!” laughs Concannon, who has been assisted by Tracey Leonard and Deirdre Brennan in not only spearheading project but also producing a promotional video.

“The response to the video has been unbelievable” says Concannon. “We had 150,000 views of the promotional video on Facebook the other day, and it has gone up since to 180,000. Pieta House didn’t realise that when they rang me earlier. They had only see it on Twitter but I told them get on Facebook. It has gone viral.”

The ladies may enjoy it while they can as for the month of June the entire Galway panel’s access to social media will be curtailed as they turn in their smartphones. In return, they will receive a Nokia text/calls only phone, which have been sponsored by former Galway manager, PJ Fahy of ECC Timber. It is hoped the venture will raise in excess of €10,000 for Pieta House West.

To donate and support his cause, go to ifundraise.ie/talkforpieta.