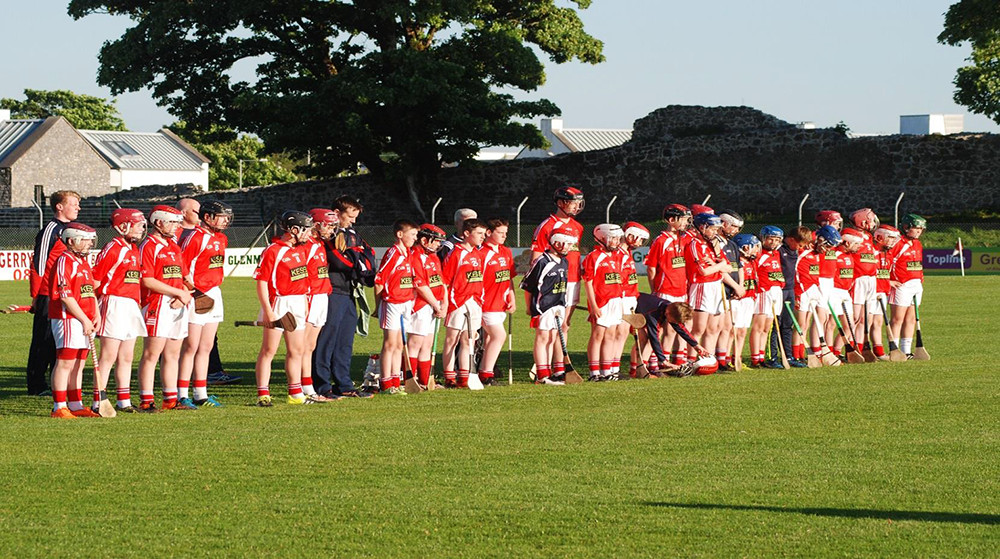 For the Carnmore faithful county final day often carries with it a nervousness, the club’s history is plagued by final day defeats and the feeling that teams didn’t do themselves justice, but yet in the glorious sunshine of Kenny Park Carnmore turned out in droves in the hope that this time might be our time. Both Carnmore and Athenry had created a Big Two complex about them over the course of the 2016 season to the point where this game captured the interest of all those involved in underage hurling around the county.

Having played out an epic encounter in April’s Féile decider, where Athenry grabbed their three in a row in that competition at the death of extra time with a one point win and having finished all square in the group stages of the championship too there was a strong feeling that both sides would clash again in the latter stages. With that said both sides were fortunate to come through their respective semi-finals with Kilconieron and Loughrea pushing the finalists to the limit. The stage was set for what was expected to be the tightest of games.

With the game just seconds old a high delivery from Athenry went straight to the net and the challengers in red found themselves three in arrears from the off. The atmosphere in terraces was rocked and the sense of nervousness about what may unfold was evident. But then Carnmore answered, Fintan Cogley won a ball at wing forward and ran at the defence and fired over with conviction, this was followed moments later with a post splitting strike on the side line by Shaun Killilea. Carnmore’s big marker then arrived in sixth minute, Man of the Match Ronan Hanley, operating at centre field but wearing no.14 on his back carried the ball past the Athenry cover into open space, the point was on offer but an inch perfect hand pass found Shaun Killilea and still 21 metres out and with a scatter of red and maroon bodies in his sight he fired a bullet into the back of the net. If past meetings were anything to go by it was now Athenry’s turn to answer back, but this did not happen.

Leading 1–2 to 1–0 Carnmore continued to come and were relentless in their efforts to find big scores with their tactic to carry the ball and take on their opposition up front proving devastating. When another run produced a penalty and Ronan Hanley coolly slotted it Carnmore had turned this game on its head. Further scores from Fintan Cogley, Shaun Killilea and Enda Collins and three 65’s from James Cummins after tireless work from the inside line of Cathal Fahy, Ronan Killilea and Daniel Fox who chased and harried all evening cemented Carnmore’s dominance while Nathan Grainger was threatening on the opposite wing chipping in with a score of his own to go with strikes from Enda Collins and Ronan Hanley in what was a huge first half by the Carnmore front six. Athenry kept their tally ticking over with five points of their own throughout the half. Torin Finnerty was tested too against a tricky Athenry forward unit but he was equal to the task with two point blank back to back saves to keep Carnmore’s lead intact. A sign of Athenry’s ability and a warning that this game was not over.

Being 2–10 to 1–5 up at the break the sense was that Athenry would come on strong and with the Carnmore defence playing into a blinding sunset the final twenty would prove Carnmore’s greatest challenge. As expected it was the Athenry men who turned the screw early on as they added two early points to chip away at Carnmore’s lead. If Carnmore’s forwards were the talk of the first half then the defence was the talk of the second. As Athenry came to terms with the Carnmore attack and scores became scarce the back line was called upon to steady the ship, Ryan Fox at fullback was strong under the constant aerial bombardment and offered his goalkeeper good protection with corner backs Aaron Healy and Gearoid Hennessey marshalling their corners with authority winning and distributing ball time and time again.

Carnmore had to wait for their first score of the half but were never upset or panicked by this as Shaun Killilea scored from long range with the placed ball. In a similar fashion to Connacht Rugby in Edinburgh, Carnmore were oblivious to the occasion and opposition and simply stuck to their own script and continued to play their game. Aidan Grealish and James Cummins and Enda Lawless backed up their full back line all day and won tough ball time and time again with Enda Collins covering every blade of grass in Kenny Park and finding himself in the thick of the action all evening.

As time ticked away and Athenry’s pressure failed to produce the scores there was a growing sense of realisation that Carnmore would make history as the game reached its final minutes. Carnmore were still full of running and punished Athenry at every turn forcing them to start all over again from deep in their half from every turn over. Cathal Fahy and Ronan Hanley continued to attack the defence with long powerful runs and Daniel Fox and Ronan Killilea made every ball stick upfront. Carnmore’s evening was summoned up when the Reds netted their third and deciding goal. Ronan Killilea made a brave hook in front of goal and against two bigger opponents refused to let the ball out. A ruck developed in the goal mouth and with both sides piling in Carnmore fought and fought and Ronan Killilea somehow got the ball into the net. Cogley almost added a fourth as he came thundering toward goal in the dying stages but was brought to ground. Shaun Killilea stepped up and struck the ball high up and over the bar and out of Kenny Park into the night’s sky and that was it. Carnmore were U14 A County Championships. 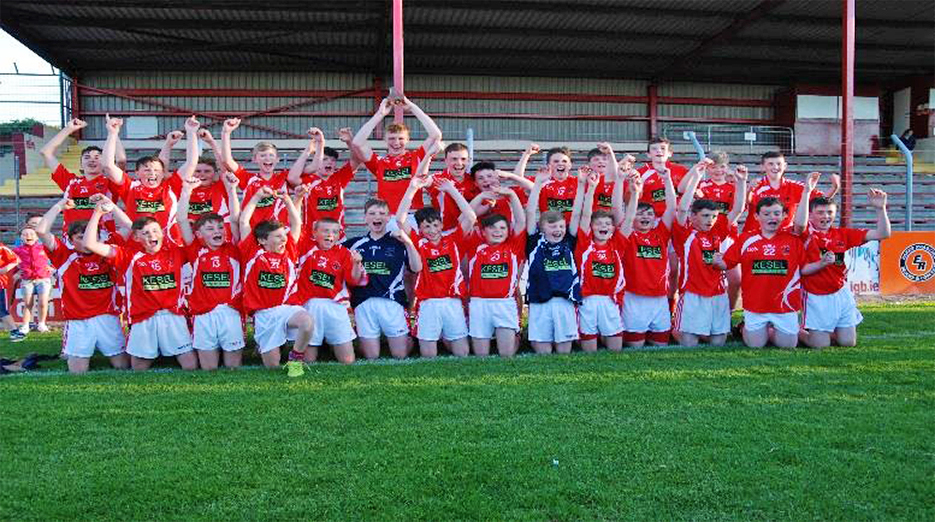 Championships are difficult to win, but the preparation required to do it at A, even at this age is huge. On behalf of everyone in Carnmore we would like to thank the management of Decy Walsh, Sean Grealish, Brid Collins and Eamon Mannion who believed that their group of lads could do this. To Annette Hanley our juvenile secretary who worked tirelessly alongside this team all season. To our senior players who took the time to mentor and coach, Kevin Killilea, Gary Grealish and Darren and Ciaran Fahy. And finally to the parents who travelled the width and breath of Galway during this journey. 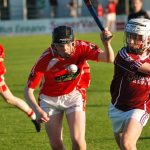 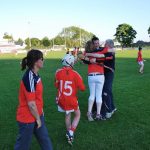 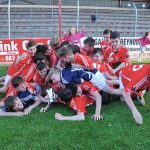 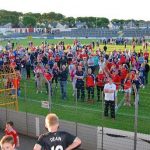 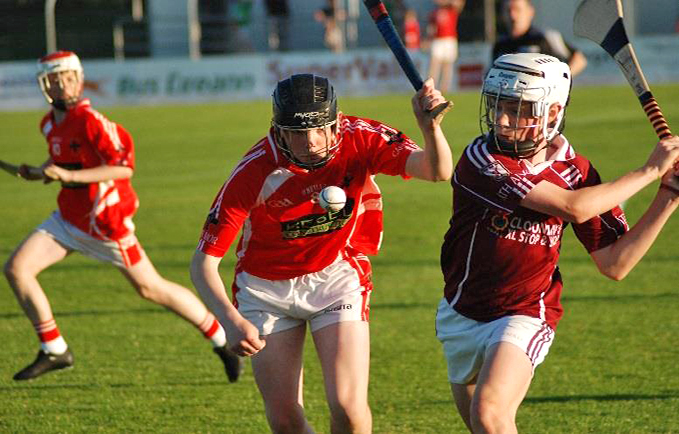 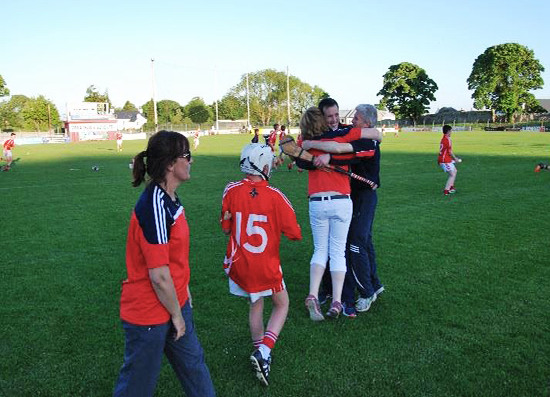 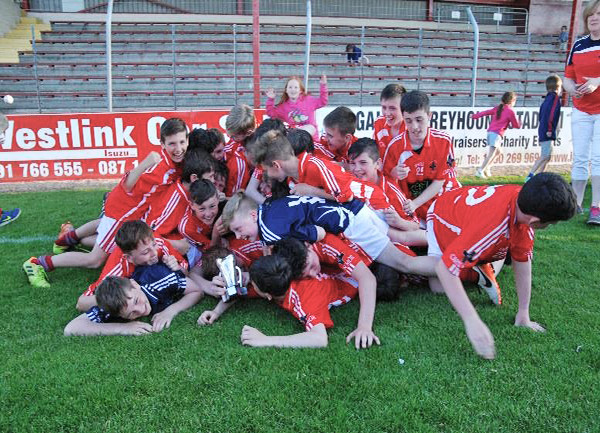 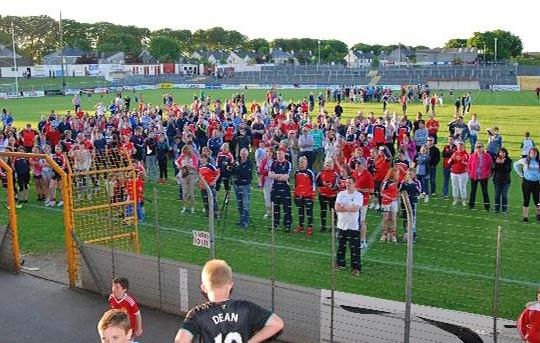