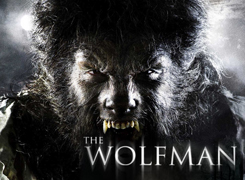 Director: Joe Johnston
Starring: Benicio Del Toro, Anthony Hopkins, Emily Blunt, Hugo Weaving
Rating: 16
Remakes and re-imaginings are all the rage these days. Thankfully, 2010’s ‘The Wolfman’ can stand apart as one that is genuinely enjoyable.
It follows the attempts of Lawrence Talbot to seek out his brothers’ killer in his hometown of Blackmoor. It soon becomes clear that it was no mere man who murdered Talbot’s brother, and a multitude of horrifying revelations soon follow.

The film nails the aesthetic of the 1800s perfectly, giving the audience a moody and atmospheric setting for some unnerving moments. Perhaps the film could be likened visually to Tim Burton’s ‘Sleepy Hollow’, with a bleak and misty town being the centre point.

There are some genuinely flat out horror moments littered throughout the film and it more than lives up to its 16 rating (the squeamish need not apply). The transformations from man to wolf are presented with impressive CG that makes the scenes very effective. Thankfully though, the crew decided to stay true to the original monster movies by ensuring the Wolfman himself uses no digital trickery. The make-up work is extremely impressive and as such really harkens back to classic years of cinema.

The cast give great performances considering this is a movie about a half-man half-wolf terrorizing the countryside. Del Toro’s Talbot comes across as a brilliantly jaded man, thrust into a devastating situation which he is forced to comprehend rather quickly. Hopkins gives a darkly comic performance as Talbot’s father. Emily Blunt is suitably convincing as a troubled widow with conflicting new feelings welling up. The always excellent Hugo Weaving (The Matrix Trilogy, The Lord of the Rings Trilogy) stands out as the determined old-timey inspector.

Directed with a well-balanced amount of shock-horror and humour, The Wolfman does its job as a modern monster movie which chooses not to tamper with the formula yet still provides a particularly pleasing ride for those in the mood for a scare.