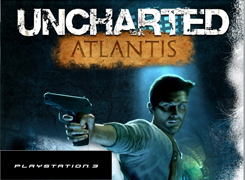 Developer: Naughty Dog
Publisher: Sony Computer Entertainment
Rating: 16
Uncharted 2: Among Thieves is the sequel to 2007’s fantastic ‘Uncharted: Drake’s Fortune’. Naughty Dog are veterans in the videogame industry, having previously started such lucrative franchises as ‘Crash Bandicoot’ and ‘Jak & Daxter’. If the original Uncharted wasn’t proof enough of Naughty Dog’s commitment to getting the most out of the Playstation 3’s capabilities, this sequel will make you a believer.

Following on from the original (knowledge of the first is not essential), the sequel sees fortune hunter Nathan Drake making various discoveries relating to Marco Pollo, the Cintamani stone and the city of Shambala. At first glance the Uncharted games seem like typical ‘Tomb Raider’ affairs. It soon becomes clear however, that they are an entirely different beast. Uncharted 2 boasts some of the most amazingly detailed graphics since the advent of 3D games. Character animation is fluid and flawless, and the incredible scenery sets the standard for modern day adventure gaming.

The voice acting is top notch, with realistically sarcastic and charismatic characters littering the game. The actors really sound like they’re giving it their all, never once sounding forced or unconvincing. Controlling Drake is smooth and intuitive and before you know it, you’ll be leaping treacherous pits and engaging enemies in hectic shootouts.

These shooting sections are where the game throws serious challenges at you. Wave after wave of enemies advance toward you and a quick and accurate trigger finger becomes a necessity. The game can become extremely difficult when you find yourself surrounded or struggling for health or ammo. Somehow, it never becomes truly frustrating as the core gameplay is simply so fun and rewarding.

Uncharted 2 delivers a grand sequel on an epic scale. Any fans of the first will no doubt want to return to Drake’s fantastic world, and those who haven’t yet taken the plunge are in for an absolute treat. The Playstation 3’s killer app has truly arrived.