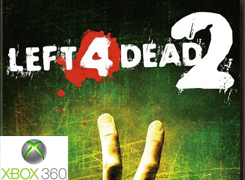 Developer: Valve
Publisher: Valve
Rating: 18
Valve’s blood-soaked follow-up to last year’s ‘Left 4 Dead’ should satisfy any fan of the original. Taking the apocalypse to the southern states of the U.S. provides an interesting scenery change for the series. There are four new characters for players to choose; Nick, Coach, Rochelle and Ellis. Not much has changed in the zombie-killing formula, but given how enjoyable the original is in either single or multiplayer, that’s not much of a problem.

The formula may not have changed, but what has been added is undeniably satisfying. The inclusion of melee weapons this time around ensures that there is still a way for you to destroy the undead even when you’re out of ammo. Guitars, machetes, cricket bats and more, now allow you to conserve your ammunition for more desperate situations. Along with new weapons, both guns and melee, the sequel introduces new types of boss zombie. The spitter spews noxious green acid at the survivors and can be particularly nasty to face. The charger can appear out of nowhere to catch the survivors off guard and slam them into the wall or ground. Jockeys leap onto a survivors shoulders and control them for a brief period. The inclusion of these new zombie types improves the overall experience but it also noticeably increases the general difficulty of the game.

There are five new campaigns unique to Left 4 Dead 2. They are quite lengthy and provide many hours of entertainment. There is still nothing like taking the fight to the undead with your friends on the same console (which only allows two players, just like the first) or over Xbox Live. The game also introduces new modes Scavenge and Realism. Realism is an excellent mode for veterans looking for an extra challenge. It removes player markers and alerts, meaning that if a team member is in trouble you will get no on-screen indication of their position. This increases the difficulty greatly and is recommended for experienced players only.

Left 4 Dead 2 is one of the best shooters to come out of 2009. Everything that made the first game great returns in the sequel, and then some. The inclusion of new weapons, characters, enemies, modes and locations all make for a feature packed sequel that improves on the original in every way.