As the sunny summer weather has arrived, so has a greater threat to people, especially children, of being bitten by ticks and contracting Lyme Disease.

According to a recent survey by the Department of Neurology, University Hospital, Galway, Galway has one of the highest rates of Lyme Disease in Europe.

“Lyme Disease is a bacterial infection transmitted by the bite of a tick and this is a particularly dangerous time of the year,” sayd Mary Smith, Galway voluntary Information Officer for Tick Talk Ireland.

Mary, who is married to Tuam man Benin Smith, formerly from St. Enda’s Avenue, knows a lot about the dangers of a bite from a tick as her husband contracted the disease a number of years ago.

While he is well now, he lost power in his arm and leg at one time after being bitten.

“The symptoms include extreme fatigue and they are not unlike those experienced by ME sufferers,” says Mary.

While only 28% of ticks carry the Borreliosis bacterial infection children in particular need to be careful when walking in woods or hills or scrubland and even on some beaches. And everybody should check their pet dog or cat. Farmers need to be vigilant too.

Strangely enough farmers are often on the lookout for ticks in their livestock and the dangers of what is commonly known as red water, but they are often not so cautious at all about themselves.

“Unfortunately the Department of Agriculture have no budgets for extra awareness campaigns at present,” Mary added. Portumna Woods, the Kylemore area of Connemara and some of the offshore islands are where the ticks can be very plentiful, but Mary gave a frightening statistic much nearer home.

“A recent survey of people bitten by ticks showed that 22% of them were bitten in their own back gardens.

“People often don’t know that they have been bitten because the baby tick is only the size of a full stop. Pets can carry them into the home where the tick thrives on blood and it will attach itself to the hair, behind the ears, in the groin area or at the back of the knee.”

She advised those going hunting or fishing always to check their gear bags before putting them in the boot of their car in case ticks might be attached to them, and never leave gear bags on the seats.

“They will feed off humans and it is advisable for people, especially children playing outdoors, to shower and scrub themselves well immediately after they come in. Doctors sometimes don’t pick up the problems very quickly and obviously the sooner it is noticed the better chance of treatment,” she added.

Lyme Disease can mimic other diseases such as Parkinsons, MS and Chronic Fatigue Syndrome and early treatment is vital to prevent serious complications. 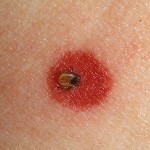 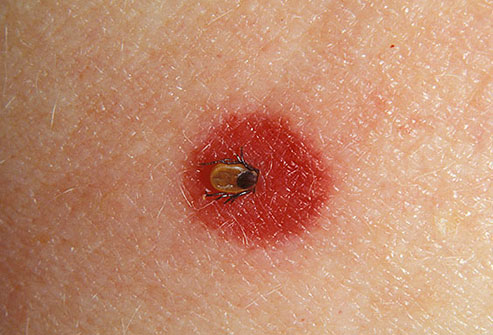