On Tuesday 3rd of November, 47 students from 1s, 2nd and 3rd year in Coláiste Bhaile Chláir departed the school at 2:30pm to travel to the RDS in Dublin. There we would attend the Web Summit for Schools 2015 event, the last of its kind to take place in Ireland, with the much publicised event moving to Lisbon next year. This event was arranged to give an insight into how young entrepreneurs took their first steps in the journey of setting up their own business. We took a break on our trip at Liffey Valley at 4:30 and we walked around and got some dinner. At 5:45 we left and made our way to the RDS. We arrived just before 7 and were seated in the middle of the arena, with an excellent view of the stage. 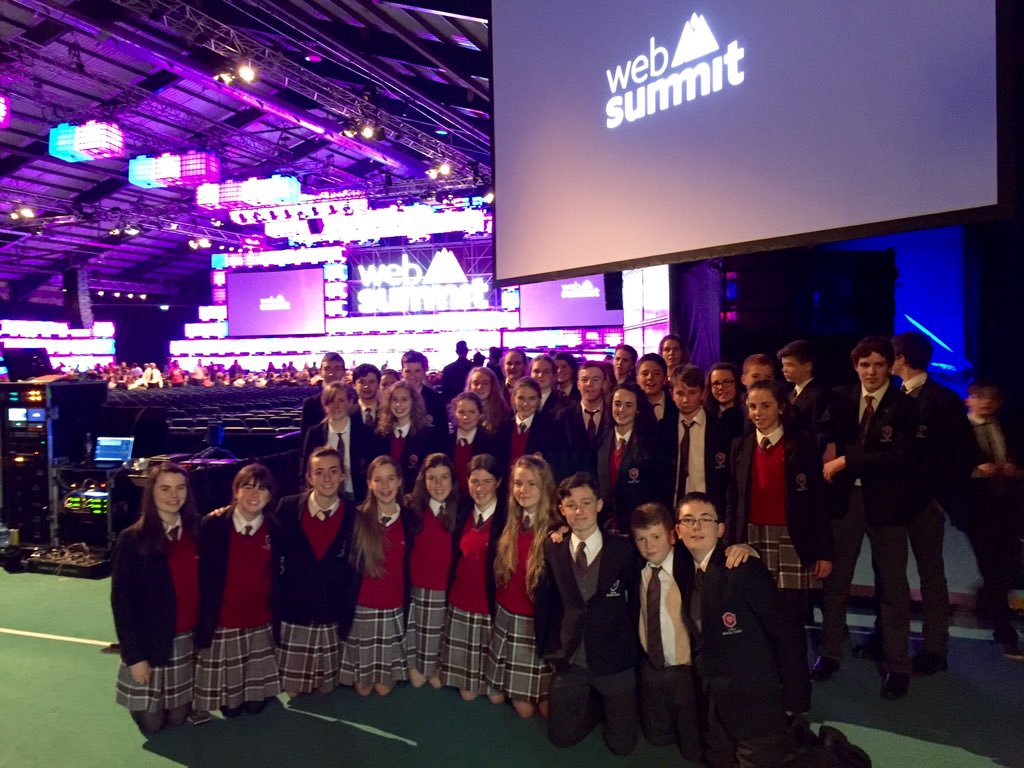 The event that we attended was hosted by Mary Moloney, CEO of CoderDojo. CoderDojo is an international group setup in Ireland that seeks to give young people an opportunity to learn about computer coding and gain practice at writing code.

First Riley Ennis took to the stage and spoke to us about his company Immudicon. Immudicon is a cancer research company. He is on the precipice of finding a cure for cancer without putting harmful toxins into your body. He gave us great advice, encouraging us to push ourselves and find something that we have an interest in.

We heard next from a group of students from St Audoen’s National School. They presented a new wearable technology that the school have adopted as part of their uniform. This device seeks to prevent bullying taking place by alerting the teacher that a student needs assistance. The device is called BullyBug and works using Bluetooth to send a message to the teacher’s phone.

The next presenter was Scott Harrison. His opening statement was ‘my mother nearly died when I was a child’ and by doing that he grasped everyone’s attention. He went on to tell us that he used to be a club promoter but he wasn’t happy with the person he was turning out to be, so he ended up leaving that life and working with a charity over in Africa. When he saw that people in Africa hadn’t access to clean water he set up his own charity called Charity:water where 100% of the proceeds go to setting up wells which can be used to supply people in Africa with safe drinking water. He outlined how Charity:water uses Google Earth to share information with their supporters and highlight the work that they are doing. He outlined the pitch that the group use with people—they ask anyone to donate their birthday to Charity:water and make a donation on this one day in the year. He listed some well known celebrities who have done this, including Will Smith, and even some young people who followed suit.

Ciara Judge was a notable panellist in the final discussion of the evening. We learned about the opportunities that Ciara has gotten involved in since winning BT Young Scientist and Google Science Fair. She showed what can be achieved by young people who take an interest in a topic and pursue it.

We left the RDS having learned a lot about the ingredients needed to promote a start-up company, as well as some great advice from a number of people who have successfully done so.