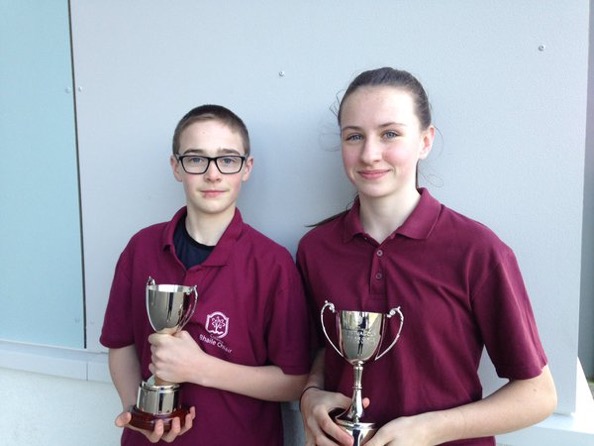 36 boys from Coláiste Bhaile Chláir competed in the St Marys invitational cross country event held on Wednesday the 16th of December. Our minor boys came first in a very competitive race against students from ten different schools. Well done to Aaron Brennan (3rd yr) who had a great win in the Intermediate race. 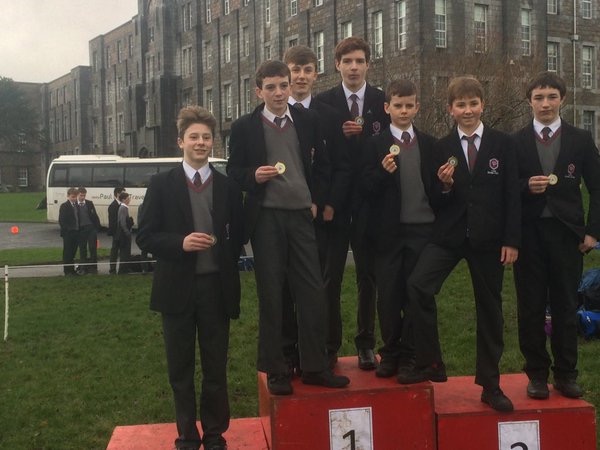 The camogie team have had a lot of success to date this year. Captained by Abbie Fox we won an U15 blitz in Galway and then went on to represent Connacht in All Ireland 7s in Dublin earlier in the year. The girls lost out on a chance to play in the final by just one point on score difference. The minor team won their last year’s postponed final beating Calasanctius with captain Valarie Coleman receiving the cup. Captained by Laoise Byrne, the Junior team are in the final which will be played after Christmas against Connemara with a chance to make it to All Ireland series for first time in this grade. This years minor A and first year A championship’s will start after Christmas. 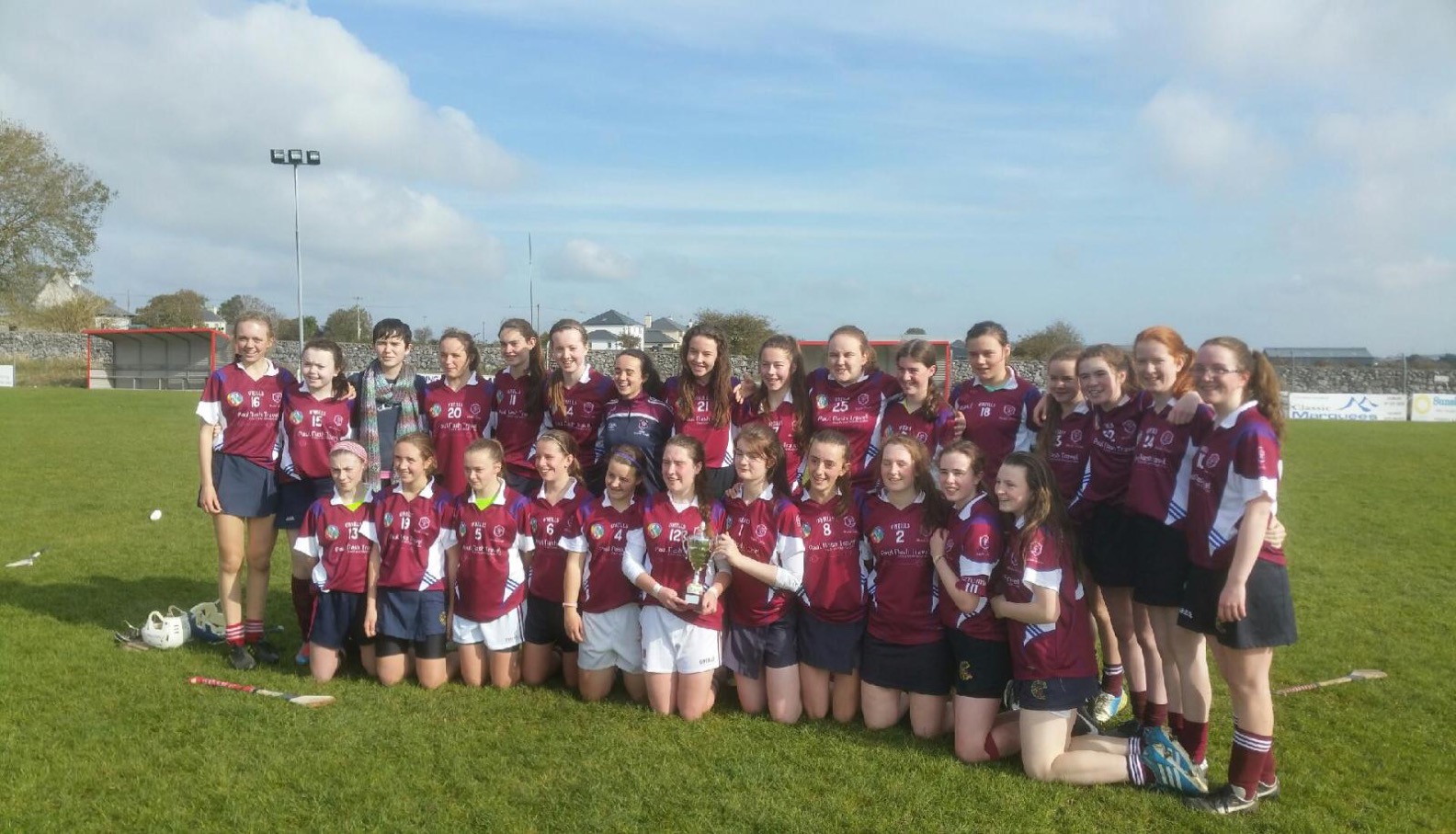 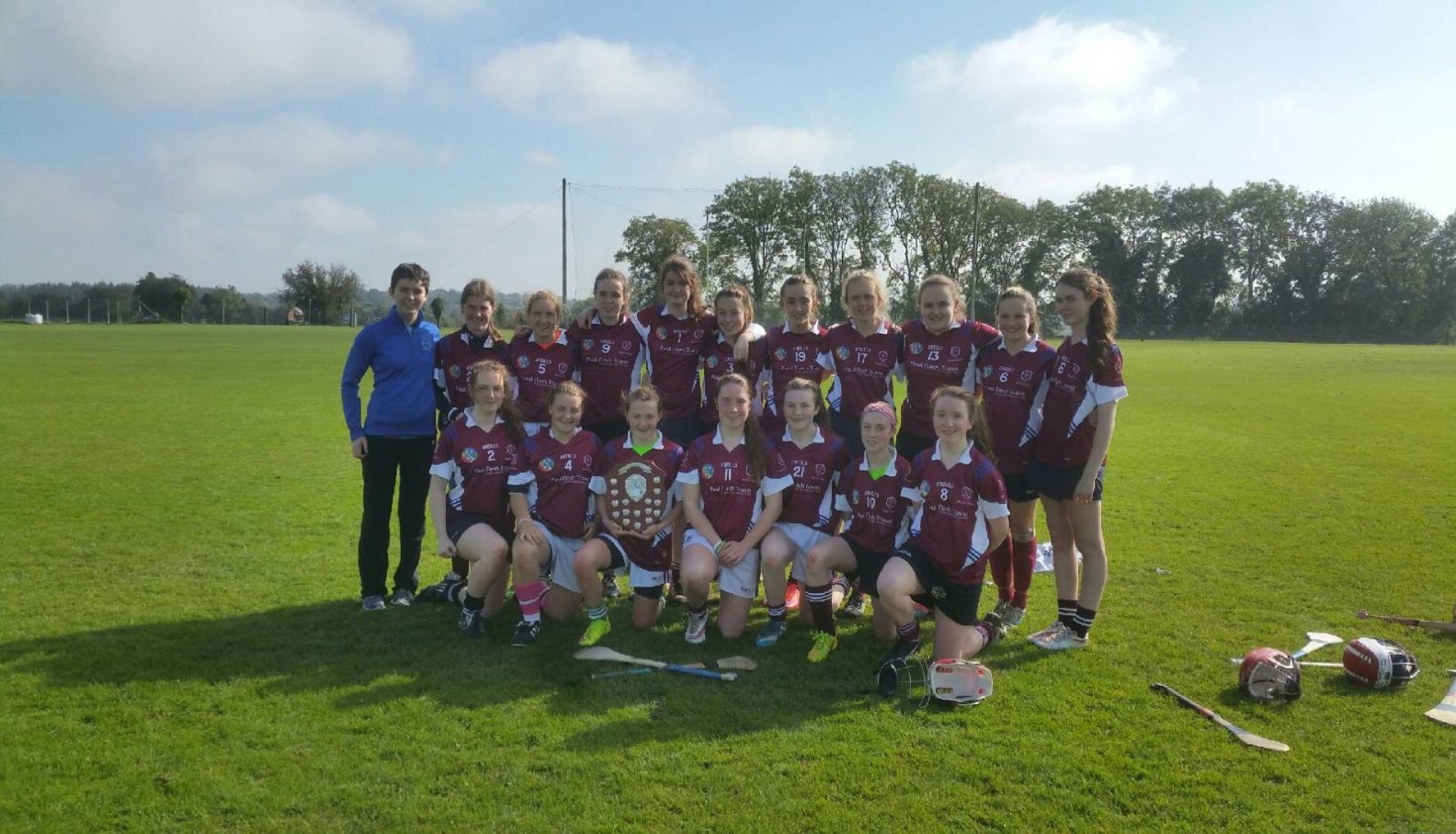 Both boys and girls U16 teams are through to the All-Ireland playoffs which are on after Christmas. 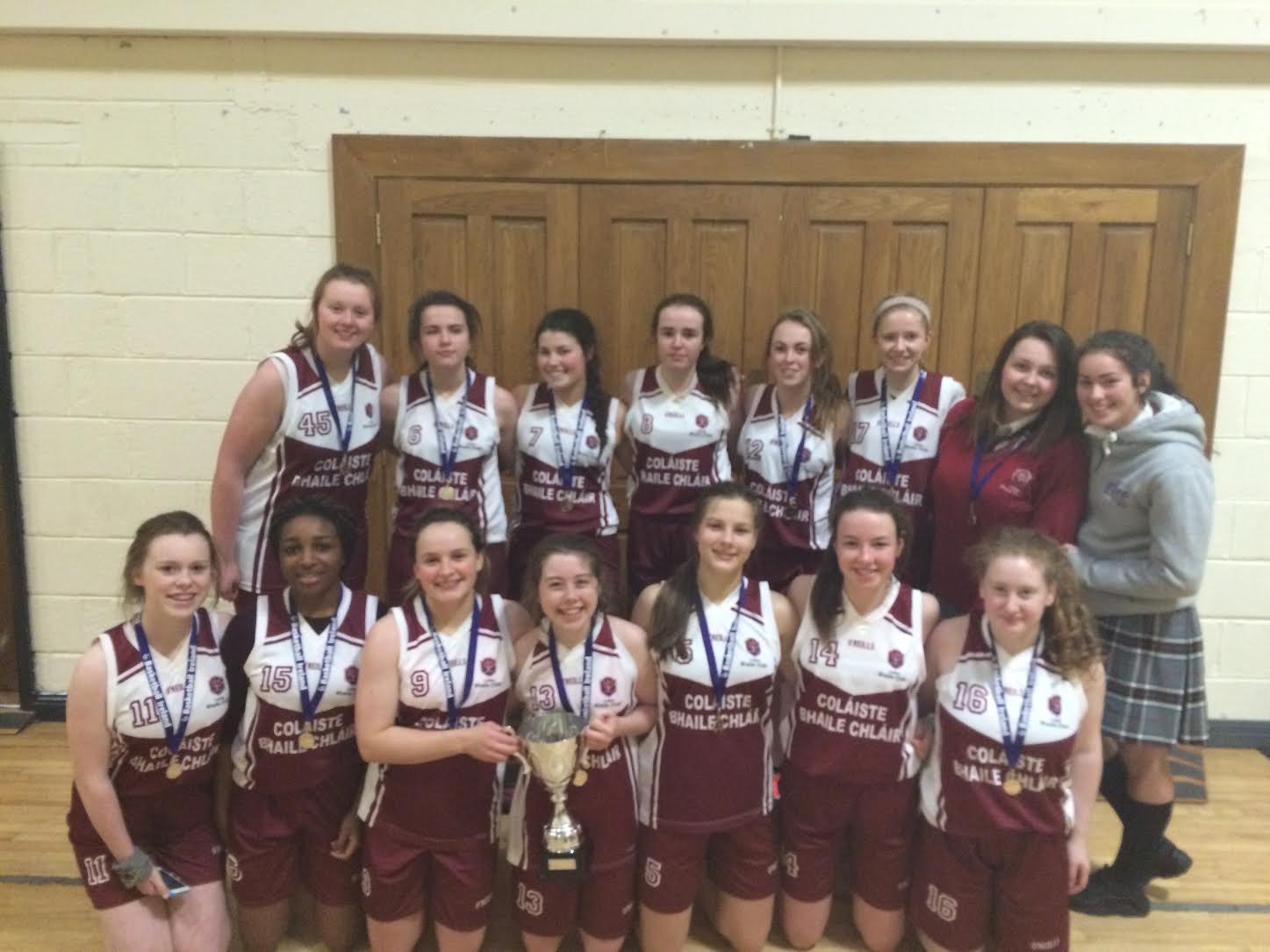 As part of our S.P.H.E community engagement project our class (2H) decided we would visit the day-care centre in Claregalway. We got the bus to the centre where we were introduced to the users by some of the people working there. After that we talked with the users and were in different groups. Some groups made flower arrangements while others made snowmen decorations out of socks and others did calligraphy. Then we went into the kitchen and had tea and cake (baked by some of the people in our class) with the users. After that it was time to go and we got the bus back to school. Overall it was good and enjoyable experience.

In the Christmas spirit, 2H thought it would be a nice idea to visit to the day care centre in Claregalway. We spent the previous weeks beforehand, organising what we would do when we went. Some students baked treats for the centre members while others thought of fun things we could do with them when we arrived there. Upon our arrival we were all quite nervous as we wanted to make a good impression , but we had no reason to be apprehensive whatsoever! We spent our time making crafts for the Christmas tree and playing memory games with the members there, but the most important thing that came out of it was getting to meet the people there. We all got to sit and talk and hear all their brilliant stories. Overall the visit was not just beneficial for them but for us too as we, just like everyone else need to remember to help and respect our elders!!

So far this school year Coláiste Bhaile Chláir students have raised money for the following charities:

Coláiste Bhaile Chláir attended Anti-Bullying Ambassador training program in October 2015. The program is part of the Diana Award which is a legacy to Diana, Princess of Wales whose belief is that young people have the power to change the world for the better. The programme offers resources and training which will facilitate students with their teachers to assist in educating their peers on bullying, lead on anti-bullying campaigns, promote culture which celebrates differences.

All of our students who attended the training received their award and are now Ambassadors in the school to promote Anti Bullying Initiatives to their peers. This initiative is that students have a voice in the school and work in collaboration with teachers to promote awareness of anti-bullying in the school.

In the past two weeks our Anti Bullying Ambassadors created and delivered their workshop titled Stop the Silence & Stand Together to their year group. The workshop was received with great response from their peers. The students deserve much praise and acknowledgement in delivering this workshop with such commitment and passion.

Congratulations to two of our students Aoibhinn Fox & Joshua Whelan were selected to attend Facebook Headquarters with Diana Award Leaders. This day is to teach the Anti-Bullying Ambassadors about e-safety, with the intention that they will then return to their schools and share this knowledge with their peers through doing an assembly and going into form groups. The Ambassadors will meet with Facebook’s Policy Team to learn about the tools Facebook have in place to keep users safe. They can also put their recommendations forward to the Facebook team on how they think the site can be made safer for young people. The Ambassadors will then work in groups to create e-safety presentations which they will present to Facebook and the group.  They will also get to have a tour of Facebook’s very cool offices.

This initiative is that students have a voice in the school and work in collaboration with teachers to promote awareness of anti-bullying in the school. Coláiste Bhaile Chláir hope to host this event next year and be part of the showcase so other schools in Galway can become involved. Many thanks to Ms Hanley, Ms Bergin and Mr O’Ceallaigh for all their hard work.

The U15 soccer team have played the first two games in their cup competition and have had mixed results against two Mayo teams. They played Davitt College, Castlebar in their first game in October, at home in Cregmore, and ran out deserving winners on a 6–1 scoreline. It was an excellent team performance with Tommy Callinan, Aaron Brennan, Adam Heneghan, Dillon Keogh and Harry O Gorman all getting their names on the scoresheet. Their next game was played at the end of November up in Castlebar, where they were unfortunate to lose out to a very good St. Gerard’s College side on a 2–1 scoreline. Their last game is against St. Mary’s, Galway, which will be played after Christmas, and a win will be needed to progress out of their group. 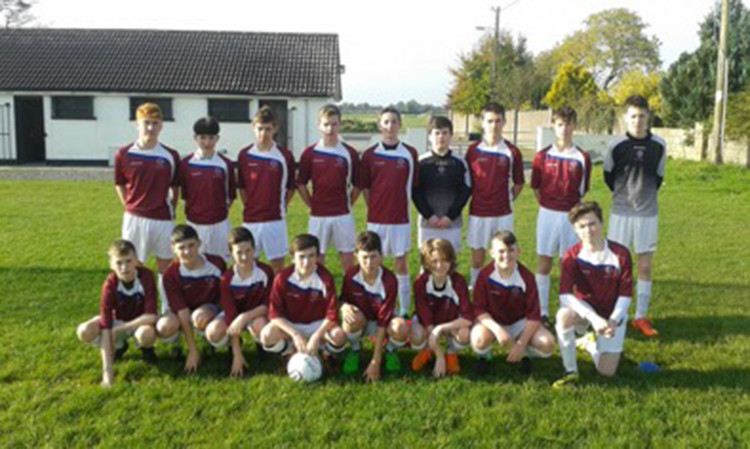 Some of the U15 boys soccer panel in their first game against Davitt College.

The U14 team played their first game against a very strong Kiltimagh side a few weeks ago but were beaten in the end unfortunately. They will be playing their other two league league games after the Christmas holidays, against Summerhill Sligo and St Enda’s Galway.

The U16 competition kicks in as well after Christmas and they will have three games to play in that also.

The school entered a team in the St. Anthony’s and Claddagh Credit Union Schools Quiz for the first time this year and managed to win the Junior Quiz at their first attempt. 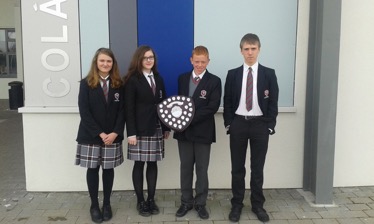 The quiz was held in the Clybaun Hotel in October and the Coláiste Bhaile Chláir team held off the challenge of Holy Rosary College, Mountbellew to win by two points. The quiz team members were all third year students: Meg Regan, Emily Sheeran, Charlie Nolan and Aidan Owens.

Materials Technology Wood (MTW) students of Coláiste Bhaile Chláir got a great opportunity to make a hurl of their own in a workshop that took place recently in the school. With help from their MTW teachers Mr Donnellan and Mr Flynn, students worked through the various stages of making their own hurl including cutting, plaining, routing and sanding, before putting on the finishing touches.

Cutting on the band saw and smoothing out on the belt sander.

The day proved very successful and everyone left with their own custom made hurl!  Thank you to Mr Kennedy for all his help. 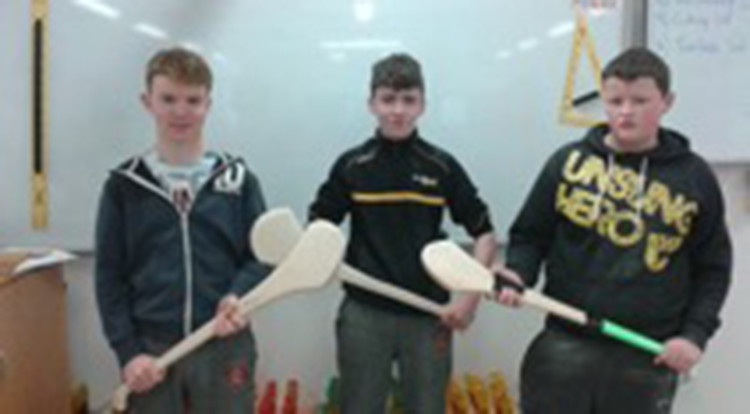 Gary, Darren and PJ with their finished hurls. 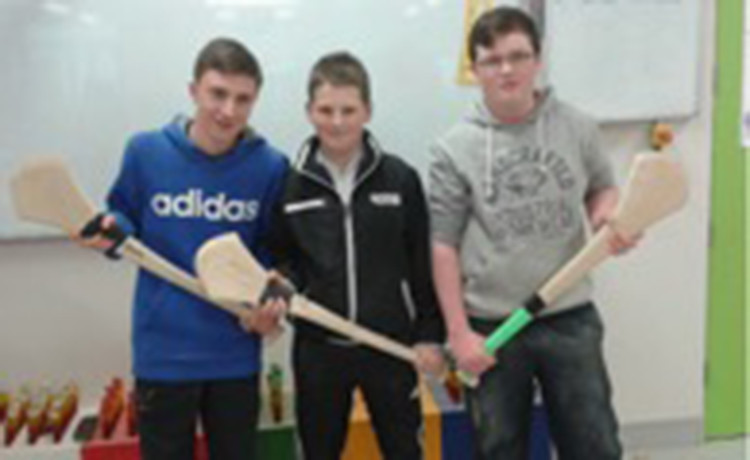 Brandon, Dylan and Mikey with their finished hurls. 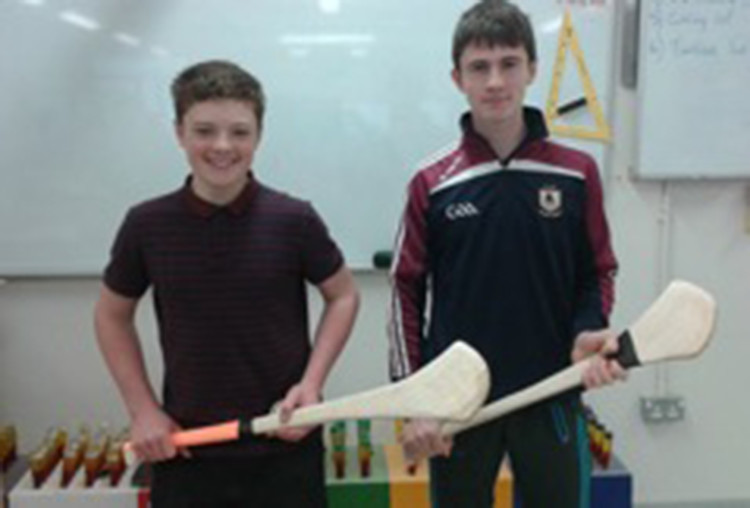 Mark and Diarmuid with their finished hurls.

Coláiste Bhaile Chláir reopens on Wednesday 6th of January. Mock and Week 20 examinations begin on the 1st of February. Wishing students, staff and their families a peaceful and happy Christmas. 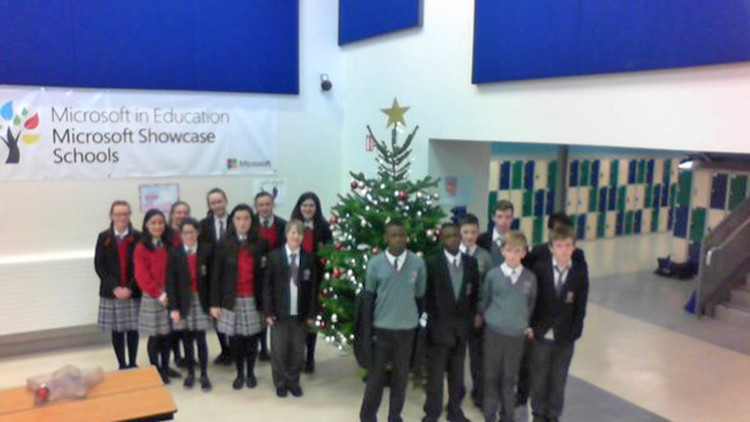 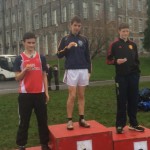 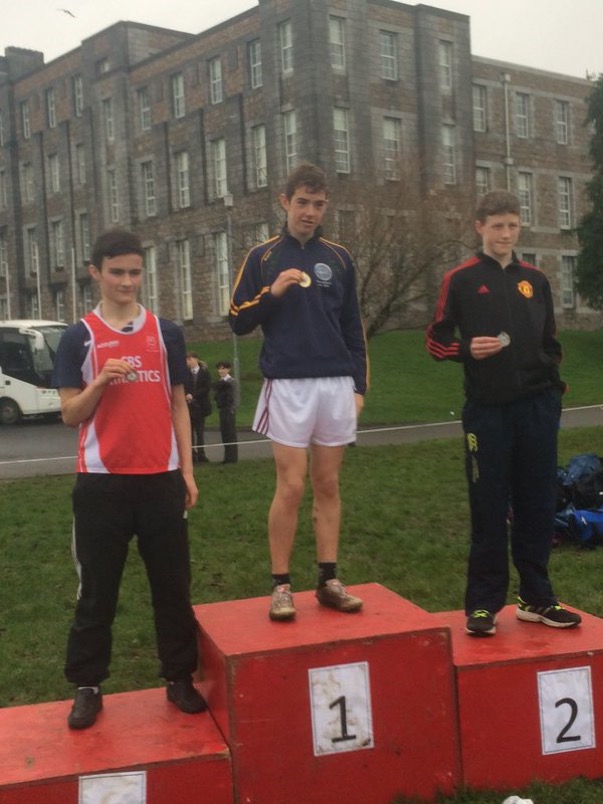