THE passing of Tom Lenihan has left a huge void in Claregalway parish.  He was a man that left a tremendous legacy to the parish and beyond and even in his later years of his battle against illness never shirked the responsibility of leading campaigns in the interest of the betterment of Claregalway.

Tom emigrated to Boston in his youth and played hurling with Fr. Tom’s in Boston for many years and it was fitting that his coffin would be draped with Fr. Tom’s jersey, alongside the Carnmore and Claregalway jerseys.

On returning to his native Claregalway, Tom wore the Carnmore number 14 jersey with pride for many years.  He took up referring after retiring from playing, and officiated in several county finals, including the last senior final that Turloughmore won kin 1985.

Tom held almost every position in Carnnmore GAA club and was equally involved in Claregalway GAA club. He went on to give dedicated service to Galway Hurling Board and held various officer positions within Galway GAA over many years.

Supported in so many projects by his wife Agnes, Tom was the person that with the encouragement of Liam Thornton of Headford started Claregalway Festival of Drama that has now become one of the leading Drama festivals in country.

That led to the setting-p of Compantas Lie when he has gone on to with All Ireland Drama titles in at several grades. Tom was also a leading figure in Claregalway Historical Society and played a major role in the development of the Museum at the Loughgeorge Forge.

Tom and Agnes also played a leading role in the development of Claregalway Senior Citizens group and many similar type projects in helping people.  Tom was also involved in Claregalway Handball club and played a major role in the new handball court coming to fruition in Claregalway.

Tom was never afraid to cross a political divide and used his local contacts to seek the efforts of John O’Mahony to seek support from Michael Ring as Minister for Sports to provide funding for a new handball court – funding of €95,000 was subsequently provided.

His remains were removed from Síoraíocht to the Church of the Assumption and Saint James, Claregalway; and burial took place in Claregalway Cemetery.

His is survived by his wife Agnes, daughters Maureen and Deirdre; sons Michael and Tom; as well as grandchildren, in-laws and extended family, neighbours and friends. 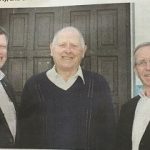