Since the start of the new millennium, the one full-size pitch that is available at Lakeview has become grossly over crowded due to the competing demands arising from twenty team panels, adult and underage. Also, over use has resulted in a deteriorating playing surface during spells of heavy rainfall. As a consequence and following a strategic review, the Club purchased twenty acres of land at Knockdoemore in 2009. The Club is committed to the delivery of actions that are required to fulfill the Club’s mission statement, that is, “to enhance the quality of life for youth and adults by providing appropriate facilities for sport and recreation to meet the demands of the rapidly expanding Claregalway community”. The Club’s ongoing development programme is summarised in this article. It will be shown that substantial progress was made during 2010 through the efforts of dedicated local volunteers, fund raising members and development service agencies. Financial grant aid from Cumann Luthcleas Gael underpins the main thrust of the new developments.

Population and household growth
In the words of Club chairman Tony Clarke “over the last five years our Club has grown from a membership of around 150 to over 800 registered in 2010”. This reflects the dramatic population and household growth in Claregalway Parish and the neighbouring townlands whose youth seek to enjoy and avail of the Club’s facilities for football. The number of houses in the Parish increased from 712 in 1991 to 1537 in 2009 (+116%) and the residential population 1992 to 2006 from 2706 to 4379 (+62%) [Refs. CSO Dublin; Galway Co.Co.]. These increases are amongst the highest in Co. Galway. Several large housing estates have sprung up, such as River Oaks (128 houses), Cúirt na hAbhainn (105), An Mhainistir (68), but no facilities for recreation or provision of amenities were included in these developments. It is the aim of Claregalway GAA Club to support quality of life values for the new families emanating from these households and from the many new households throughout the Claregalway area in general.

Senior status
Side by side with population growth in the Parish, the rise of Claregalway GAA Club to Senior status has been equally significant. The Club gained promotion from Junior A to the Intermediate grade in 1998 and, after disappointments in 2000/2001, Club history was made on Bank Holiday Monday, October 28th 2002, when the Intermediates won the Co. Final to gain promotion to Senior ranks. Since then every effort has been made to retain Senior status and consolidation in the County Senior Football League has been given top priority. The focus on such consolidation was rewarded in 2009 by promotion to Senior A League status. The Club also fields adult and underage teams in Junior A, Junior C, U21 and Minor grades. 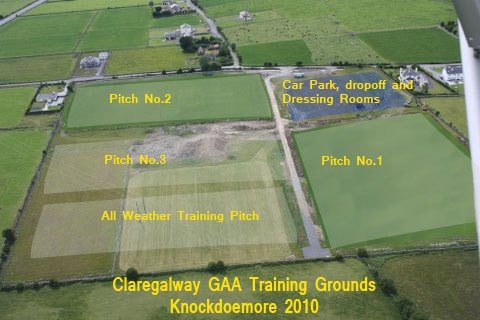 Pictured above is an aerial view of the layout of the new Grounds on-going at Knockdoemore. 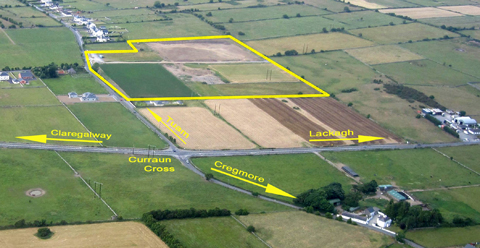 Pictured above is the site relative to road access.

Early in 2010 the Club set out a number of development targets and deadline dates for the delivery of its programme this year:

The Lakeview pitch will continue to be the Club’s home venue for Senior Football League fixtures. Undertaking much needed improvements to the playing surface will require closure of the pitch for temporary periods of time to facilitate works on-field. Through the good offices of the Co. Football Board, the Club has had use of the Grounds at Loughgeorge; this facility may or may not be available in 2011.

To publicise this development programme, the Club set out a calendar of events early in 2010 to promote public awareness and support. A fund raising workshop was held on January 17th and the Registration Evening in the Club Centre on February 25th was used to promote membership. Lá na gClub on May 9th included a Sponsored Walk from the new grounds at Knockdoemore to the Club Centre at Lakeview. The Club held a Barbeque on the forecourt of Hughes Super Valu on July 27th. A week-end Music Harvest Festival was held on September 17th–19th, including a Fun Day on the Sunday. Next up was the Fashion Show Extravaganza held in the Clayton Hotel, Briarhill, Galway on October 21st; the resulting sell-out speaks for itself as regards the excellent planning of this event. Presently, a fundraising Table Quiz is arranged in the Claregalway Hotel for Friday December 3rd.

Financial inputs from Cumann Luthchleas Gael
Our Club has received tremendous support from the Football and County Boards in Galway. With large borrowings it was important that assistance be sourced from within the GAA organisation at national level. We submitted a Detailed Business Plan to the Connacht Council for funding under the Urbanisation Fund from GAA Headquarters. John Prenty, Secretary of the Connacht GAA Council and Paddy Naughton carried the baton to Croke Park and our submission for Phase I was successful. This allowed us complete our first phase as outlined earlier.

Another example of the Claregalway GAA Club’s role at the heart of the local community was very evident when 220 members and friends turned up for the Club’s Annual Social at the Claregalway Hotel on February 5th. A raffle was held in support of the Flood Victims’ Relief Fund—it raised €1,000. The Club’s facilities at Lakeview were made available for the Clare River Harriers 10km Road Races on May 18th and August 14th. The Claregalway GAA Club Summer Camp was held in Loughgeorge on July 12th–16th. In a new arrangement this year, the Club’s merchandise and purchases of club gear were outsourced to Hughes SuperValu.

Conclusion
“We all have a responsibility to look to the future”—quote by a popular US President.

“But I must stop reminiscing, progress must have its way; for the old folk of tomorrow, the past will be today.”—(Unknown)

Acknowledgments
We express thanks to Martin Kirrane for aerial photographs recorded during the year and to Joe O’Connell.