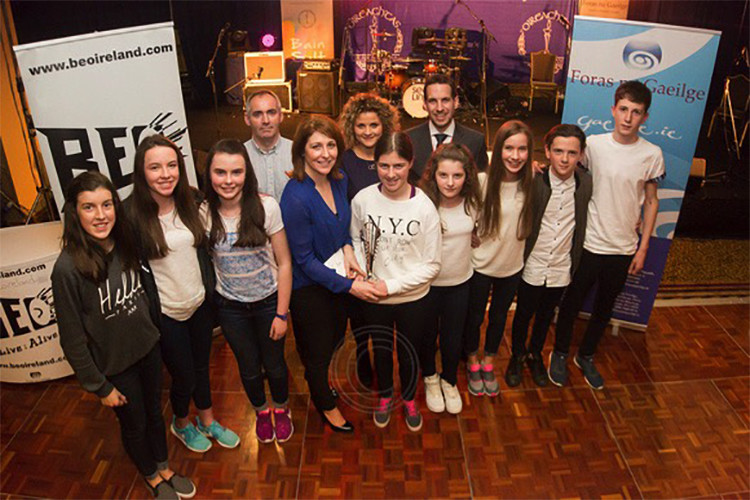 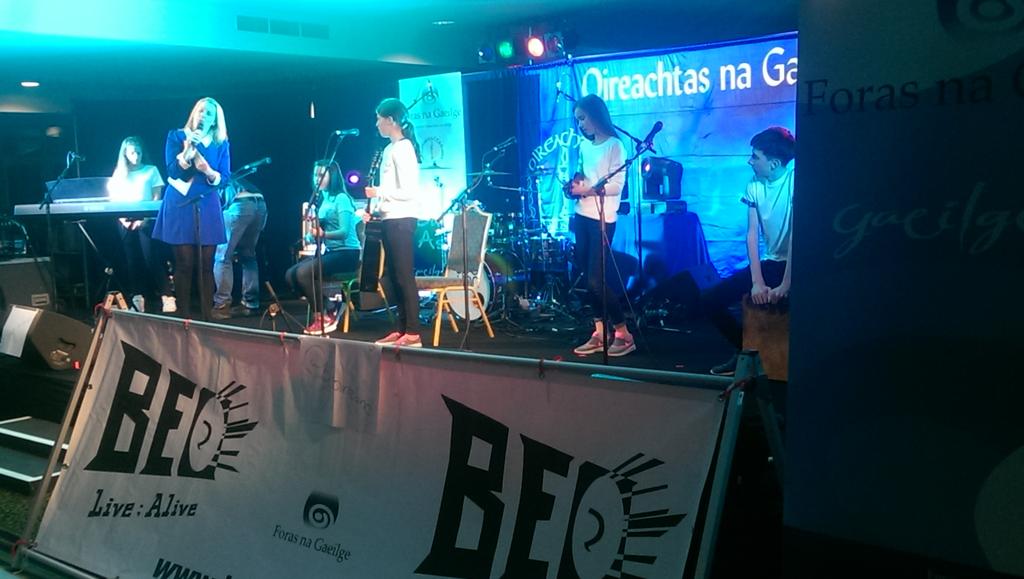 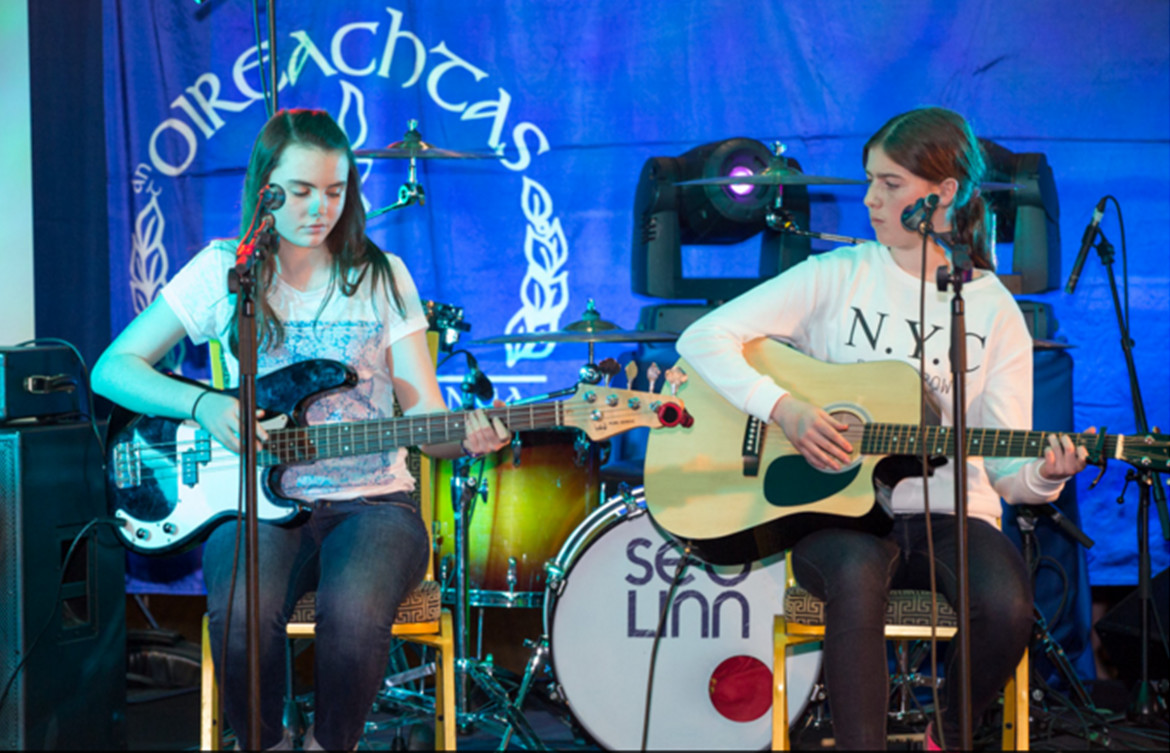 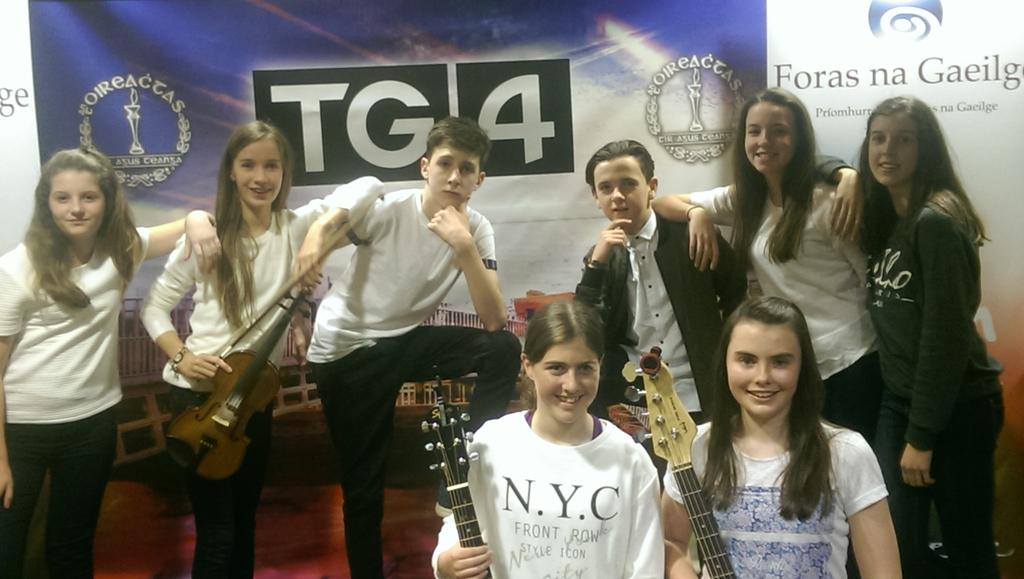 On Wednesday the 18th of November the students from Cúnamh were invited to the official opening of GAP (Galway Autism Partnership). We were one of six schools and day centres invited. 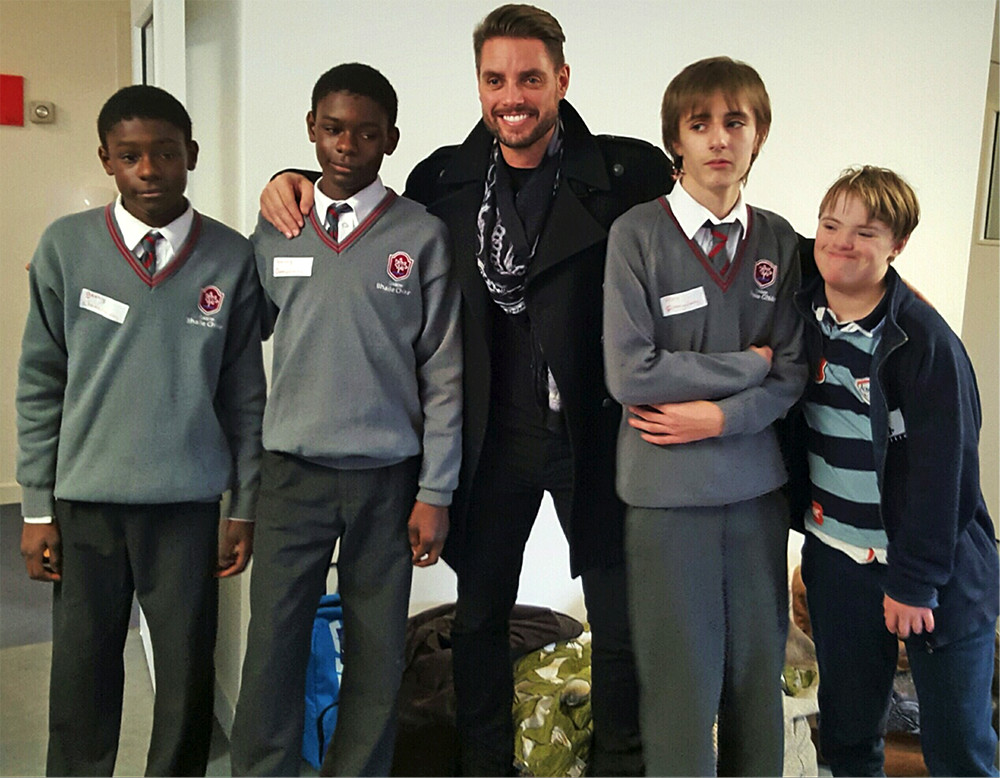 The charity were celebrating the refurbishment of their premises. The building is 42 years old and named Tígh Ronáin after Ronan Dooley, who is now 50 years old. His parents worked very hard to help children with autism in the 1980s. His mum Maisie met us at the opening.

Keith Duffy, actor and singer officiated at the event. He is a national spokesperson for autism in Ireland. He was very nice and friendly and happy to meet with us. We took lots of photos too, he asked about our school. We did some artwork for the walls of the building while we were there and had some food too. It was lovely to meet the other students and parents. The photographs will be in this week’s City Tribune newspaper Friday 27th November 2015.

Coláiste Bhaile Chláir always hosts a number of exciting events during science week each year and 2015 was no different. Astronomy night had to be postponed due to the antics of Hurricane Barney but all other events went ahead as scheduled. A particular focus this year was on Exploring STEM Careers as our 3rd year students will have to choose Leaving Certificate subjects next term and so are thinking about their future options already. This was a great success and some of the events and student reactions are recorded below.

My class got a talk from a forensic scientist. Her job was to perform post-mortems on people that were murdered, shot or died under suspicious circumstances. She talked about how you could get DNA of a person especially from a crime scene. The DNA of an attacker might gather under your finger nails and forensic scientists can take a swab and analyse it. 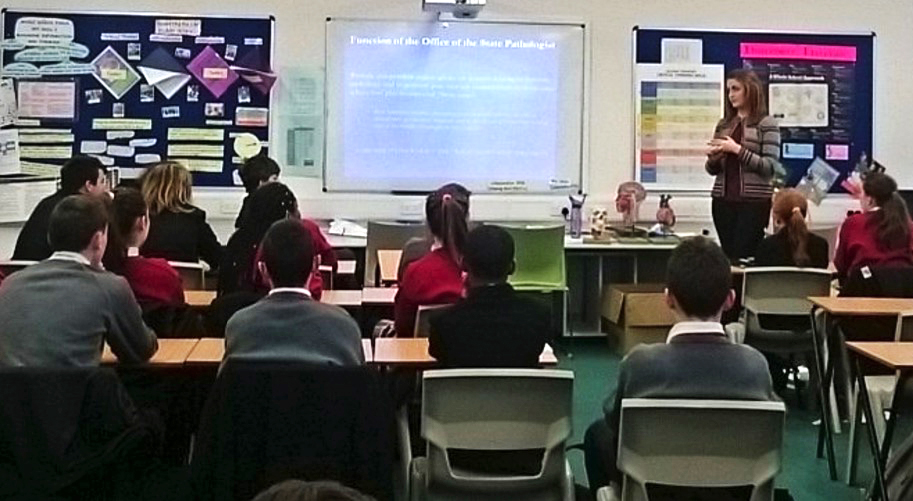 They might then be able to match this to a suspect that they found at the scene of the crime and it would prove you had a fight with that person. She explained that is it not as easy as on TV! I really enjoyed the talk and would like to work in this area in the future. 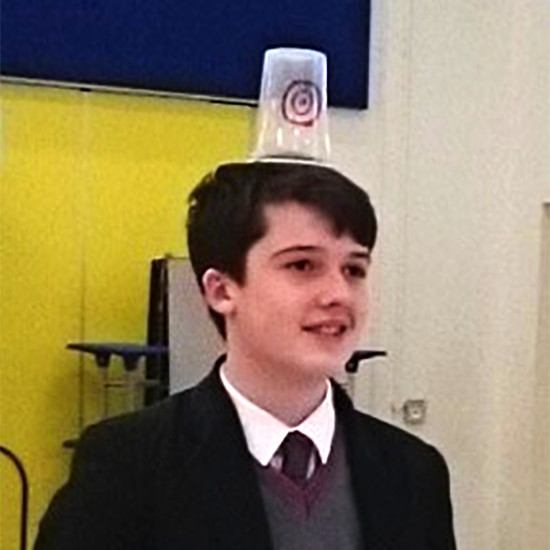 On Monday a nice man came in to do science with us he showed us loads of cool stuff. He showed us airplane wings said that air travels faster on top of the wing and catches just under the wings which is what makes the airplane fly. Then he got a balloon and blew it with just a small gust of air then he let it go and it went right up to the ceiling. When he added more air to the balloon and this time it didn’t go up as far—he taught us that it had more weight this time and that’s why it did not go up so far.

The last experiment he did was with a fizzy orange tablet which he put it in a small container with water. He put the lid on and shook it and after 20 seconds it blew up and went all over the place. This was my favourite experiment. He was a nice guy and really funny and show us really cool experiments so it was really fun and made my day. 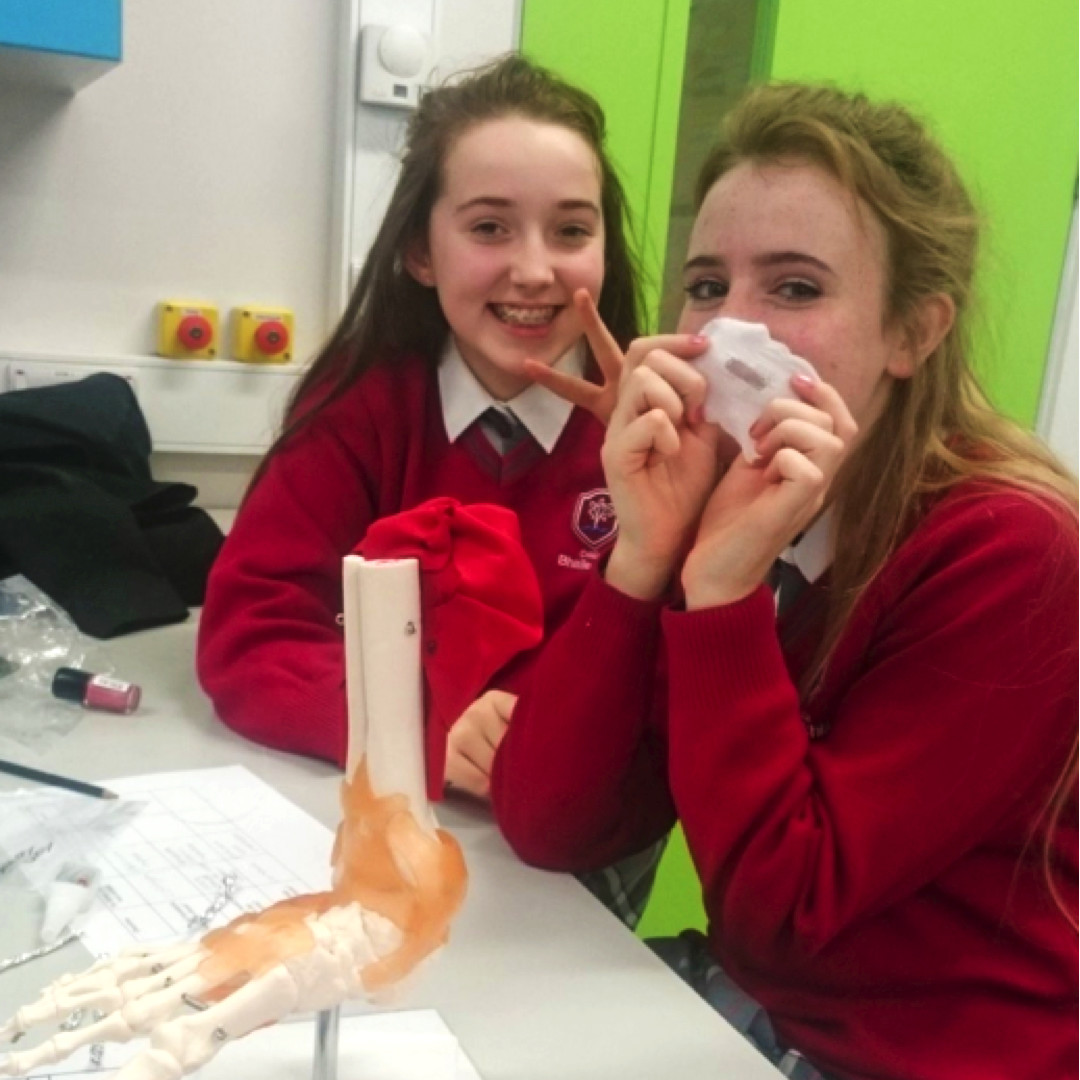 Claire and Melody from Curam came to visit my class and we learnt about biomaterials that are used to help people during surgery. We also learnt what different designs could be used to repair different injuries.

They taught us about collagen which is a stretchy tissue and how it is made. They even showed us examples of some of the biomaterials that they work with every day. They also taught us how to repair a torn tendon using the right materials to ensure the body doesn’t reject it and so it acts like a real tendon. I found this class really fun.

Our guest speaker was called Jim Geraghty. He was a Civil Engineer and now is working as a Project Manager in Biomedical Engineering in Medtronic. He came into our class to talk about his job, past projects he worked on and new projects he hopes to make. We first talked about the wide variety of opportunities there is in Engineering, and we saw that there are forty different types of Engineering you could study!

It was quite interesting as many didn’t know the differences between some types of engineering and he went on to talk about the perks of being an Engineer e.g. you can travel all around the world working with your job.

He also explained how you can change the direction of your career easily by doing a Masters Degree in a different area.

We then tried to guess what Engineer would be involved in making this and other projects/objects e.g. stadium = structural and civil engineer. Near the end of our time with him he showed off a new project his working on trying to build a support for an artery made out of metal which can help someone. At the end of the class we had enough time to ask a few more questions. It was great having him in as I learnt what subjects I should take myself as I’m thinking of doing Biomedical Engineering. 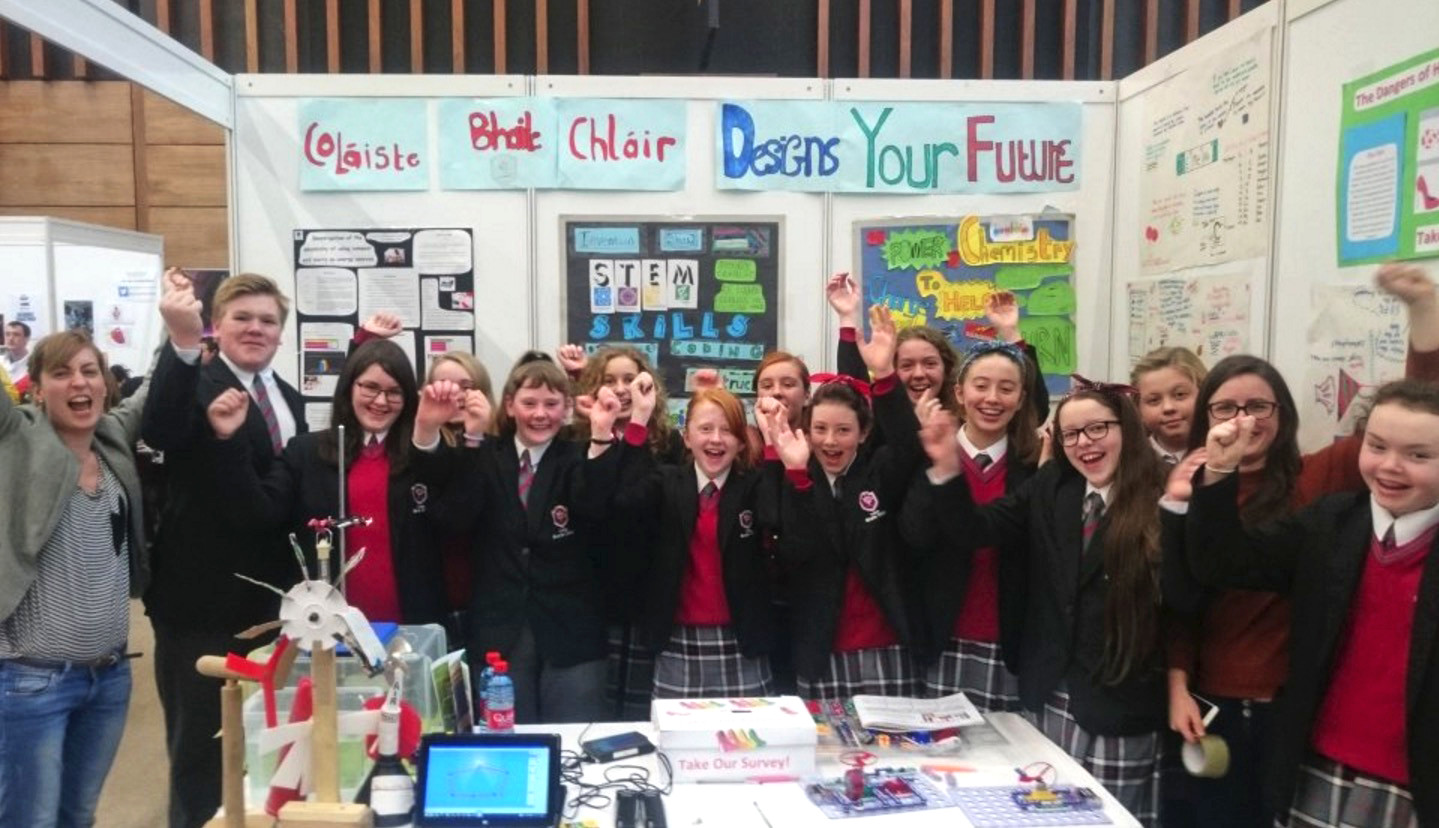 We had a stand at the Galway Science and Technology festival in NUIG where we showed off loads of science experiments we were doing at school. We talked to all the members of the public as well as the Dean of Science Donal Leech about our projects including apps we had developed and our SciFest and BTYSTE projects. It was lots of fun and we learned a lot of new things from the other stands. We won the best secondary school there which we we really excited by. It was a really entertaining day and a good learning experience.

Well Done to Ms Eleanor Nolan who was awarded Science Person of the Year 2015 by the organisers of the Galway Science Festival for all her work promoting Science and STEM especially at Coláiste Bhaile Chláir. Maith thú!