INVESTIGATING Gardaí are currently following up on a number of calls they received in relation to the brutal murder of Galway taxi driver Eileen Costello O’Shaughnessy twenty years ago.

Gardaí in Mill Street in Galway have confirmed to The Connacht Tribune that “several calls” were received following a reconconstruction of the events surrounding her death back in 1997 that were part of a recent Crimecal programme on RTE.

And in another twist, the brother murdered taxi driver Eileen Costello O’Shaughnessy says that he doesn’t want to go to his grave without his sister’s killer being found.

In the aftermath of the reconstruction of the crime to coincide with the 20th anniversary of her brutal murder, her brother Martin Costello in Corofin has made an impassioned plea for anyone with information to come forward.

He said that he didn’t want to go the grave not knowing who murdered Eileen and why. “Twenty years on and we are no closer to finding out who killed her,” Martin told The Connacht Tribune.

But it has now emerged that, on foot of the RTE programme, a number of calls were made to the Gardaí and a spokesman in Mill Street told the Connacht Tribune that each of these were being followed up.

“I can confirm that several calls were made over the past week and each one is being followed up.  At the moment we cannot say what the nature of the calls were but we are hoping that they may progress this ongoing investigation.

“Every call that has been received is now being thoroughly followed up on and we would like to thank those who have made the effort to make contact. It is obvious that the reconstruction has jogged a few memories and hopefully it may help our inquiries,” the Garda spokesperson added

Her former colleagues on the taxi rank in Galway city have also made countless pleas for information to come forward in the hope of making a vital  breakthrough two decades later.

The mother of two collected her last fare at around 8pm that evening to Claregalway and two hours later she was dead.  A local farmer found her body the following morning.

Eileen was originally from Corofin and her brutal murder shocked the whole community.  Several hundred people were interviewed in the aftermath of her death but there were no arrests.

Her brother Martin Costello, who owns a bus hire firm in Corofin, said that the family were not contacted in relation to the latest TV construction for RTE’s Crimecall but he added that a member of the Gardaí in Galway keeps contact with him on an occasional basis,

“At this stage it is difficult to believe that anyone will be caught for the murder but the fact that people have now been in touch gives us new hope.  Up to this guards seem to have drawn a complete blank but hopefully something might come of the latest developments,” Martin Costello added.

The murder had a terrible effect on Eileen’s mother who died eleven years after the tragedy not knowing who was responsible for her daughter’s death.

SINCE the murder of Eileen Costello O’Shaughnessy, Gardaí have made appeals for information that would lead to the identity of her kller.

Back in 1997 there were sightings of the taxi being stopped on the hard shoulder three miles outside the city on the N17 and it was then spotted turning right down Tinker’s Lane at Knockdoemore where the body was discovered by a local farmer the following day.

A taxi being driving erratically towards Galway city was subsequently witnessed by other motorists that evening.  Eileen’s blood-stained taxi was abandoned at the old Lydon House baker on the Tuam Road.

A number of people, who were seen in the vicinity of where the body was dumped, were asked to come forward but they failed to do so despite repeated appeals.

Even a woman who approached another taxi driver in Eyre Square some weeks after the murder saying that she had vital information did not make contact with the Gardaí subsequently.

Eileen was savagely beaten to death and it is obvious that the perpetrator apparently picked up close to Galway city, drove her blood-stained

taxi back in the N17 towards town and then abandoned the vehicle.

It was a murder that shocked several communities in County Galway at the time and despite exhaustive inquiries on the part of the Gardai in Galway, no one was ever arrested in connection with the murder.

There have been TV, radio and newspaper appeals for information about the murder of the 47 year old mother of two and despite a number of lines of inquiry, investigating officers are no closer to finding her murderer.

The Gardai insist that the investigation is ongoing and they have four key areas which they are focusing on.

Anyone with any information is asked to contact Galway Garda Station at 091-533250. 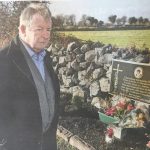